Some 60 people gathered Monday night at Janesville’s Holiday Inn Express to participate in a sit-in that organizers say was part of an escalating campaign to pressure the venue to cancel the Trump rally scheduled for Tuesday afternoon. Janesville police arrested 6 activists and charged them with disorderly conduct and trespassing, a misdemeanor, holding them on $550 bail each for about 6 hours.

Among those arrested was Z! Haukeness of Madison, who says more confrontational actions are necessary to prevent Trump from inciting further violence against peaceful protesters, immigrants, and Muslims.

“This is a time when we need to rise to the escalation Trump has created,” Haukeness said. 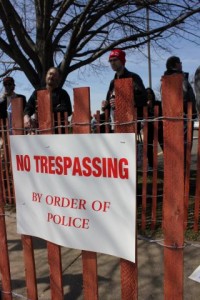 “The [disruptive] tactics we used yesterday are very mild in comparison to the actual violence Trump is promoting,” they added.

Last week Mittness created a Facebook event calling on her neighbors to protest Trump’s visit to her hometown. She says she was surprised by the range of responses.

“[I was] surprised by the outpouring of support from the community,” Mittness said, “but also by the threats that were being made by Trump supporters on the page, including death threats to some of us.”

By 11 am hundreds of people had formed a line to enter the 1000-person occupancy Conference Center at the Holiday Inn. By 1 pm, the crowd of protesters had grown to several hundred people as well.

The two groups were separated by a kind of demilitarized zone set up by police using snow fences. From time to time, people exchanged insults and engaged each other in debate across the fence while down the street, a line of vendors sold pro-Trump buttons and t-shirts reading “Trump 2016: Finally Someone with Balls” and “Bomb the Hell Out of Isis.” 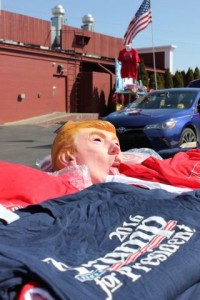 Bell says Trump is the only person capable of addressing the country’s economic crisis, the root cause of which he believes is immigration and population growth.

“For every job there’s three people in line… and the new liberal Left wants to expand illegal immigration,” Bell said.

“People are just fed up with politics as usual, not just from liberals, but from establishment GOP. You have just as many open-border, cheap-labor Republicans like Jeb Bush and… Paul Ryan… and that’s Trump’s appeal.”

Leslie says the Democratic and Republican party establishments have left voters with no other choice but Trump.

“What’s the difference between the Democrats and the Republicans? What choice do we have? It’s Trump,” she said.

Many at today’s rally said they had tried to hear Trump speak in Chicago on March 11th, and were upset that massive protests on the University of Illinois-Chicago campus caused his campaign to cancel that event.

Even among protesters, there is some disagreement about whether and when to embrace disruptive tactics.

Evan Miles, a student at Beloit College protesting Trump, says he defends the first amendment rights of Trump supporters. For him, the peaceful co-existence of today’s rally and counter-rally are the epitome of the democratic process.

“We are exercising our constitutional right so we can make sure that a man who we personally believe spreads hate and bigotry cannot become president,” Miles said, adding “but they are here because they believe this man can help and this is the epitome of the American election process, at its finest.” 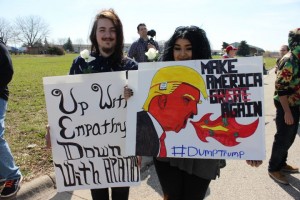 Z! Haukeness has a much less rosy view of the political process unfolding in Janesville. They say that Trump’s rhetoric amounts to hate speech not protected by the First Amendment to the Constitution.

“The hate speech that he is using is promoting violence, and it’s very dangerous to the protesters who are going into the rallies, especially people of color,” Haukeness said.

“He’s saying, if you beat somebody up, I will pay for your legal fees. He’s ratcheting up that violence against people within his rallies and it’s spreading to people out in the community,” Haukeness said, citing a recent triple homicide of a Puerto Rican man and a Hmong couple in Milwaukee that many believe should be prosecuted as a hate crime.

Trump delivered his speech in Janesville Tuesday afternoon without incident. Afterwards, he headed to Milwaukee to participate in a GOP town hall hosted by CNN.