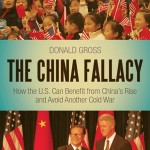 On Tuesday December 4, host Aaron Perry speaks with Donald Gross, author of The China Fallacy: How the U.S. Can Benefit from China’s Rise and Avoid Another Cold War. Donald Gross has a background in government and politics: In 1992, he joined the White House Staff of the National Security Council during the Clinton Administration, then became a Senior Policy Adviser to the U.S. Arms Control and Disarmament Agency, and from there became the Senior Adviser to the Under Secretary for Arms Control and International Security Affairs.

Donald speaks about his book, “I had a lot of experience dealing with the Chinese government diplomatically during my experience in government. During the Clinton Administration, especially, we were successful in improving relations with China, and bringing China into the World Trade Organization… it’s the largest growth market in the world for exports of U.S. goods and services.”

Donald explains the two major fallacies about China that he deals with in the book: the inevitability of war with China, and the harm the U.S. is experiencing as a result of a growing China. “On economic grounds I strongly believe that U.S. prosperity will increase as a result of improved U.S.-China relations, it will generate hundreds of thousands more U.S. jobs… On the security side, we all have to recognize something that’s not well known, that the U.S. has an overwhelming military superiority over China in both nuclear and conventional forces.” Aside from addressing the military and economic aspect of U.S.-China relations, Donald also speaks on the humanitarian aspect, “the most effective measure an authoritarian regime can use to justify internal repression of human rights is external threat from a foreign country. When U.S. ramps up military pressure against China, the internal police use that as a justification to legitimize their repression of democratic movements, of human right advocates in China.”

Learn more about Donald Gross and his book on his official website.

Read related articles about this issue here.
Listen to the interview here: