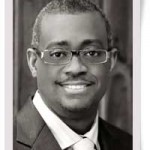 On Tuesday October 16, our host Aaron Perry interviewed Dr. Handel Reynolds, author of The Big Squeeze: A Social and Political History of the Controversial Mammogram. Dr. Reynolds is a breast radiologist at Piedmont Hospital in Atlanta, Georgia. The Big Squeeze, which “traces the forty year journey of… the mammography in the United States,” provides the history and roots of the controversy and clarifies many misconceptions about mammography. Says Dr. Reynolds, the intent of the book is to “inform, educate, and ultimately empower women to make some of these important health choices for themselves.” The origins of the mammography test can be traced back to1973, when the National Cancer Institute and the American Cancer Society jointly sponsored the Breast Cancer Detection Demonstration Project. In this project, 300,000 women were, for the first time, recruited to undergo annual mammography and physical exams during a five year period.

Dr. Reynolds discusses one part of the book in which he speaks about the controversy behind the exam, “mammography has been promoted as a ‘just do it’ approach…we have not had a frank and open discussion of the strengths and the weaknesses of the exam. Because screening for cancer is never a completely straightforward proposition. There are risks or harms associated with mammography as are associated with all cancer screening tests.” Dr. Reynolds explains three possible risks: false positives, in which a mammogram falsely detects cancer, false negatives, in which the mammogram fails to detect cancer, and over-diagnosis, in which although cancer is found, it would have in actuality never “come to light” in the individual’s lifetime had it not been detected. Dr. Reynolds advocates for informed decision making that will allow a woman, after hearing about both its strengths and weaknesses, to decide for herself when, and if, to undergo a mammogram.

When asked to discuss some of the misconceptions society has about mammograms, Dr. Reynolds discusses the belief many people hold that mammograms can prevent cancer. Mammography should be treated as an early detection test, he says, not a preventive measure. According to Dr. Reynolds, a survey conducted in 2003 showed that over 50% of women believed a mammography was indeed a preventive measure. A huge controversy in the United States regarding mammography is the question of whether women under the age 50 should indeed be getting this test. For women undergoing a mammogram in their forties, Dr. Reynolds explains, “The magnitude of the benefits is smaller, and also some of the risks or harms of mammography, particularly the false positives, is more common among women in their forties. And so that risk-benefit ratio actually is more favorable as you get older.”

Mammography has been promoted widely by the American Cancer Society and the American College of Radiology. Dr. Reynolds explains, “…we have been afraid of confusing women, or muddling the message, by giving a frank discussion of the limitations of mammography. There has always been a desire to keep the message simple…and the simple message is, have a mammogram, it is good for you. The goal has always been to increase the utilization rate of mammography, but not necessarily to educate…and that approach has done women a disservice, and that has led to some of the misconceptions we have talked about.”