Today, as rain began to fall, a few hundred East High School students walked out of their third period class and gathered on the front steps. Most were wearing red or pink to show solidarity with a sexual assault victim. The students gathered in support of a teenager who was allegedly raped in a private residence after East High’s homecoming last weekend.

The unnamed victim was not at school or at the walk out today, but she sent a message to the group.

“I wish I could be there with you guys right now, standing up for all the victims of sexual abuse and harassment,” she says. “I wish this world wasn’t so f*cked to the point where we need to go out of our way to be heard and given the rights we deserve.”

Felize Castaneda is a friend of the survivor and was with her the night of the alleged assault. Castaneda is also an organizer of today’s walk out.

“I don’t want to be part of a school community, where a rapist can walk through the hallway with his head held high,” she says. “I want everybody here to know that this is what we’re doing it for okay to get [the alleged perpetrator] out of this school. We want him to suspend it until he is prosecuted. And then we want him out of here forever,” Castaneda told the crowd. 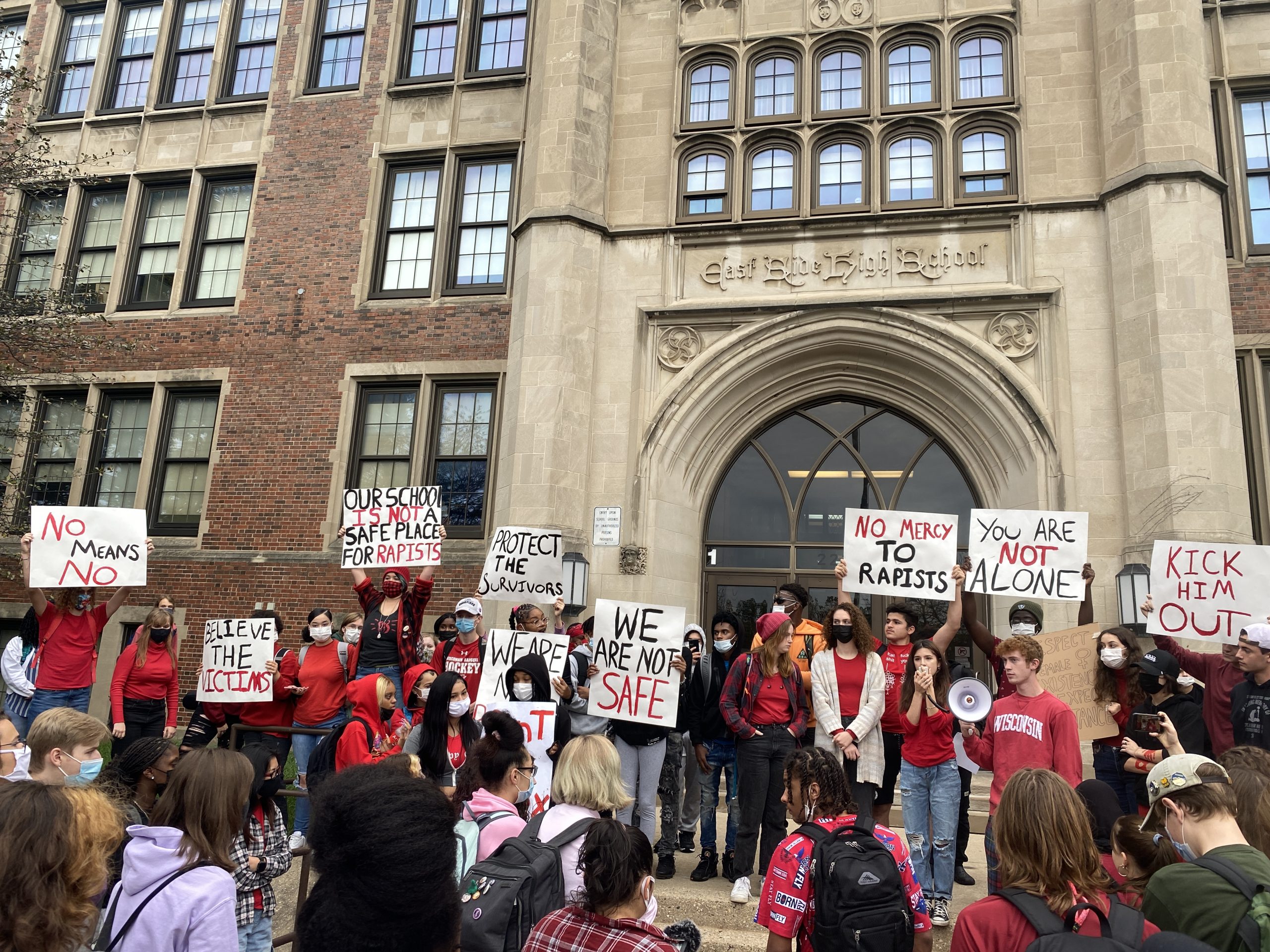 Castaneda says the incident happened at her house on Saturday night, and the victim was taken to the hospital shortly after the incident. Madison Police are investigating , reports the Wisconsin State Journal. While students speaking today named the alleged perpetrator, WORT is not because he has not been charged with a crime.

Earlier this week, a group of students concerned about the alleged assault met with East High School Principal Sean Leavy, who is in his first year in the position.

W-O-R-T obtained a recording of that conversation, during which Leavy says he is required to follow the school board’s procedures. In the recording, Leavy points to due process and refers the students to an assistant principal to “process the incident.”

Whitman Bottari is a student at East High School. She was in that meeting and felt unheard.

“We were asking for the basic protocols for sexual assault. We spent 14 minutes asking, we were called emotional, we were told that we felt there was a rape, and we had no answers,” she explains. “Eventually I said, ‘You could have told us the answers by now, how hard is it, how long is this protocol? How complicated is this protocol to enact?  And we still couldn’t get answers.” 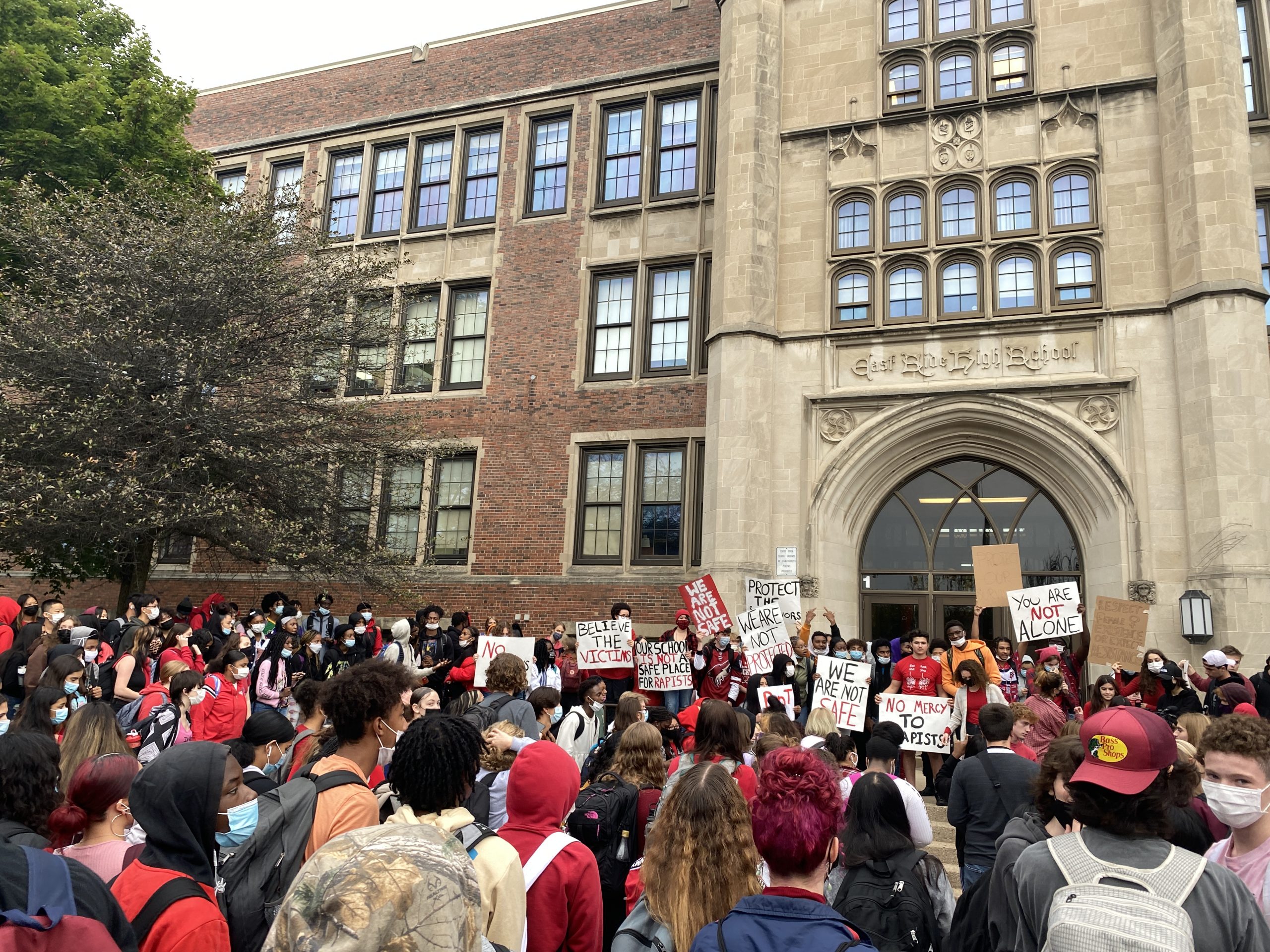 Bottari is a member of the school’s Gender and Equity club. Even though she works on sexual assault and harassment issues, she says training on what do if an assault happens has been lackluster. “I have never been personally told how to report a sexual assault or rape. I have never been told how to report sexual harassment. We’re only told, report it. Those two words.”

The district’s safety plan requires a critical response team to activate if an assault happens at school; however, it does not clearly outline a policy for assaults involving students off of school property.  The district’s behavior education plan lists non-consensual sex as an expulsionary behavior.

In an email sent to the school community ahead of today’s walk out, Leavy apologized for his response during an assembly last week about that behavior education plan. He says in the email that at East High School, they “strive to have a culture that everyone feels safe, respected, valued, and supported.”

Bottari says that’s not enough. “Take what we’re saying seriously. We aren’t just kids. We are fighting for this. We’ve experienced this, and we need help. We are out here begging for help, and the administration and the district needs to do things about this.”

Students are planning a second walkout on Friday morning. That walkout is aimed at demanding policy reforms for school-related sexual assault, and protesting the administration’s handling of this incident. School officials did not return requests for comment by deadline.