On Tuesday April 30th, host Anjuli Brekke discussed the efficacy of foreign aid and the best strategies for developing nations. The guest for the first half of the hour was Duncan Green, author of the book “From Poverty to Power.” Green is Oxfam Great Britain’s Senior Strategic Adviser. He was Oxfam’s Head of Research from 2004-12. “From Poverty to Power” contains the accumulated knowledge of 25 years spent researching and writing about reducing poverty and combating injustice. During the second half of the hour Anjuli continued the discussion of foreign development strategies with University of Wisconsin Professor of Political Science and expert on African Politics Scott Straus. 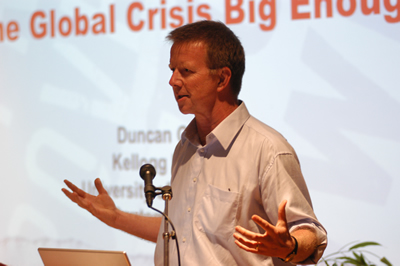 Last summer the White House released its plan for Sub-Saharan Africa. The report follows the thinking of many these days, that trade, not aid, will produce the best results in the shortest amount of time. For more than half a century, the development industry has focused its attention and money on primary education, health issues, gender equality and other building blocks of a healthy society. What they missed, critics contend, is that without jobs, these new skills are of little use. While Western nations have attached requirements of good governance and transparency to their aid dollars, China has plunged onto the continent with offers of new roads, ports, infrastructure and a hearty appetite for mineral resources. Some argue, however, that growth alone is not necessarily economically and socially just. Increased growth can also raise inequality and may not improve life for the majority of a countries citizens. In his book, Green argues that a radical redistribution of power, opportunities, and assets rather than traditional models of charitable or government aid is required to break the cycle of poverty and inequality. The forces driving this transformation, he argues, are active citizens and effective states.

Read more about “From Poverty to Power:”

Read more about Scott Straus and his work: