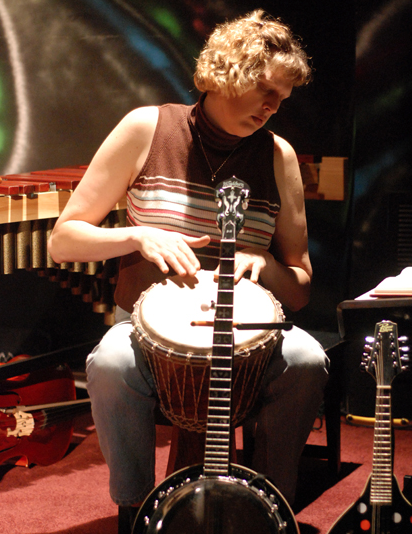 Joining the Buzz on April 12, 2013, Folks from Encore Studio!  KelsyAnne Schoenhaar and Jon Meister, members of the theater group, joined us today to talk about an upcoming production called, “Real Life.”

Encore Studio for the Performing Arts is the only professional theatre company for people with disabilities in the state of Wisconsin.

KelsyAnne Schoenhaar – Executive Director, Founding Artistic Director and resident playwright.  In this case, she also plays, “Karen” in Real Life (the only Encore show where Kelsy plays the role of an actor).  27 instruments are played by her in the show.  Kelsy has been a professional musician since she was 12 years old, has been working in theatre since she was 16 and with people with disabilities since she was 20.  (She’s 46.)   She put all her experiences together and founded Encore in 2000.  Kelsy also has two children within the “high-functioning” autistic spectrum.  Her education included a scholarship for music at Northern Illinois University and a Masters of Business Administration.

Jon Meister – A longtime writer and musician, Jon has been an artistic consultant with Encore for about 3 years – when his acting career began.  Jon has been working in human services for 13 years.  He plays the lead role of, “Jay” in Real Life:   a person with high-functioning autism, who with the help of his family and his amazing genius, becomes a successful adult.

Many people with autism are considered to live in a world all their own. But is it any less real than the culture we inhabit? Real Life offers a window into a fascinating world encompassing a dichotomy of intellectual genius and severe social awkwardness. Focusing on high-functioning autism and Asperger’s Syndrome, Real Life follows the lives of four individuals with this disability. How they live, how they survive, how they flourish, and the fascinating drama that is their real life. An original, full-scale play with music.
”… the year’s most beautiful show.”
“… one of the most moving theatrical productions I’ve seen in some time”
“…fabulously original and effective.”
– Kenneth Burns, Isthmus
”…engaging and authentic” “… a near perfect marriage of script and talent”
– Jan Neudeck, Madison Magazine
All shows are $15 but we offer student/senior discounted tickets for $10

Our specific dates/times are as follows: