World music host Jeff Spitzer-Resnick recently interviewed Simone Bottasso, an Italian accordion/flute player and half of the music group Duo Bottasso. They met virtually during WOMEX, the Worldwide Music Expo, and Simone explained the fascinating trajectory of the music and art he makes with his brother Nicolò Bottasso, from very traditional Italian Alpine dance music to highly sophisticated electronic videos triggered by their instruments.

The interview aired on WORT’s Diaspora show on November 12th. Here is an edited (for clarity) transcript of their conversation.

JSR: Hi, this is Jeff Spitzer-Resnick here on WORT 89.9 FM, Madison, Wisconsin. I’m really pleased that I’ve been able to arrange another interview from our experience a few weeks ago at WOMEX.  Though it was virtual, it was still a great exposure for not only me, but also three other DJs from WORT and hopefully our listeners, to hear a lot of great music from around the world. This morning I have Simone Bottasso. Good morning, Simone.  He is one of two brothers, known as the Duo Bottasso and Simone, why don’t we start by having the listeners understand where are you right now?

SB: Right now I’m in Rotterdam in the Netherlands, because I moved here six years ago, and my brother lives in Torino.

JSR: Your brother is Nicolò, right?

JSR: I was very fortunate that you happened to invite me to a Zoom meeting during WOMEX and there were a number of other interesting people there. Is there any particular way that you decided who to invite or was it kind of random?

JSR: That was a pretty cool conversation.  I’ve continued some relationships with some of the people since then. What I found interesting was your evolution as musicians. I thought our listeners would appreciate hearing how you started and then how you’ve developed over time as a duo.

SB: Well, everything started in our house when Nicolò was almost born because I started playing a little bit before he was born. I’m older and I was the soundtrack of the childhood of my brother, let’s say, and we started with the traditional music from our region, which is in the Northwest of Italy, close to Torino.

And there we have a living tradition. So it’s music that is not being rediscovered, but has always been danced in the song. And we started playing for dancing music. So, our teachers taught us by ear all the melodies of these dances. And when we were ready, then we started the investigating around with other kinds of music.

JSR: Let’s explore that dancing music for a moment before we move on. Is there a name for that type of dancing music that you started off with?

SB: Yeah, it’s maybe less known than the dances from South Italy, and it’s more related to the French traditional dances in the culture called the Occitan, which is the language that was spoken by troubadours in the South of France and our ballet still in the mountains, in the Alps, and this language and the dances are still spoken and danced in the mountains.

JSR: And it’s the dance music that we would find on your album from, I think about six years ago, Crescendo.

SB: Yeah, after playing a lot of time for dancing, we felt like we wanted to also make our, a point on this music and make music for listeners, so we kept a bit what we were doing on stage and we arranged the bit with our different experiences. So what you will hear is our personal way of interpreting these dances and new composition based on the dances. I must say that when you play for dances, you have to keep some structures. You cannot go out of the form of the dances. So when we started playing for people also listening, then we started having more freedom and to express ourselves better

JSR: That makes sense from what you told us during our previous conversation, back during WOMEX, about your evolution. So tell us more now about how you and Nicolò evolved in terms of your music.

SB: After Crescendo, we started exploring contemporary music. I moved to the Netherlands where I studied composition and then started studying electronic music and contemporary classical composition and also jazz, which my brother was studying, and we met a lot of nice artists that wanted to share with us their language. So our aim has been after Crescendo to make collaborations with people, and try to create together a language. So not just opposing the two languages, but really making a common shared language.

And this happened with the two directors for whom we made the soundtrack of their movie and the sound designer that was taking care of the sound of this movie.

JSR: What was the movie?

SB: The movie is a documentary about Tunisia called Biserta e altre Storie. 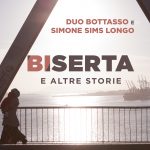 JSR: Is that available? I mean, can people see it if they want to see it or is it pretty hard to find?

SB: It’s pretty hard to find, but if you want you can find the soundtrack on our Bandcamp, which is the first collaboration with Simone Sims Longo, an artist that works in the multimedia arts in electronic music and in sound design. And we started collaborating with him and then we went on for the new show that we are now presenting.

JSR: So tell us about how that new show is evolving.

SB: Yeah, we were missing in Biserta the visual aspect of the music because we were performing this music, without the movie, on stage because we wanted people to make their own movie following our music. But, after a while we thought it would be nice to have our instruments triggering images and videos live.

So with the same ease we have improvising notes, we can also try to improvise videos. So, we made a system that is activating video frames and processing the videos with the laptop, and we projected these movies. Well, it’s not a movie. These visuals are live.

JSR: It’s the actual sound of the instrument that triggers the video.

SB: Yeah, there are several techniques in this show. Every composition is based on a different visual and audio technique, so sometimes it’s the accordion that has a homemade MIDI system inside. So it means that when I play a note to my laptop, recognize which note I played and can trigger some actions and then the dynamic of the violin or the electronic sound made by Sims can activate videos.

JSR: Well, we obviously can’t show the video on the radio, maybe on our website if we can get some video with this triggering mechanism, we can put it together in a web story. So that would be pretty cool-maybe after this interview airs.

SB: Yeah, and we have all the videos on our YouTube channel, which we are trying to upload with all our different sites. Let’s say of the Duo Bottasso. So the listeners can type a YouTube search for Duo Bottasso with two t’s and two s’s and they can find all the things I’m talking about.

JSR: Excellent. We can link to that too, in our web story. So, we’re in a difficult time worldwide for many reasons, but particularly because of COVID. How has that affected your ability to perform, especially with these live videos?

SB: Well, of course it caught us in a very bad moment, because last March when COVID was starting in Europe and especially in North Italy, our region, we had the first well-planned tour of Duo Bottasso, let’s say, because we had 40 days of work in a row that we organized it by ourselves the winter before. And that was starting in beginning of March in North Italy. So it was really the best timing ever. But, well then we postponed some concerts, and we made some live video performances and we started to have a nice game of composing music together on distance because I’m in the Netherlands, Nicolò in Torino.  So, it is very difficult to be together and play a live stream. So we found out some techniques to play together, even if we are in two different sides of the world.

JSR: Just like we’re doing this interview. I’m in central Wisconsin in the forest and you’re up in Rotterdam. So, hey, it’s amazing what technology can do and what we’re learning to do during COVID. Did you find meeting people at WOMEX helpful?

SB: Yeah. For me, it was the first time I went there and I wanted to go there since a long time. But, I was also a bit scared of not knowing how it works or how to get in contact with people and to really explore it.  So this was a good occasion to start meeting people, start knowing people, see also how other people are struggling like us. And this is also helping, I think, for everybody to see that we are all in the same situation, but everybody’s looking for and sharing solutions.

JSR: You’re definitely not alone and hopefully doing interviews like this will bring some attention to you and your brother, the Duo Bottasso, as they call it on this side of the pond in the US. Of course, this interview and the music that we’ll play will stream worldwide. So people can listen to it wherever they have an Internet connection. I, for one, was really glad to be able to meet you. And I hope our listeners enjoy this interview and the music both beforehand and afterwards. Any last thoughts for our listeners, Simone?

SB: I have many thoughts. I think just explore music and culture, as much as you can, even if you cannot feel it live and you are sometimes alone, I think that heart is really happy. And before anything, when you get a book or you just play a nice CD, I think you will find the peace that you need.

JSR: That sounds great. Well, we look forward to the day when COVID is over for many reasons, but one reason is we really appreciate world music in Madison, and maybe one day we can see you live here in Madison.

SB: Would be lovely.