Tune in Friday July 2, 8 pm for a fascinating hour of all things Nirvana, or join us in person for WORT’s live listening party at Parched Eagle Brewery featuring even more rare recordings and cool giveaways!

Why all the hoopla over the band right now? Madison’ Magazine‘s upcoming July cover feature “The Untold Story of Nirvana in Madison” was spurred by the discovery of 31-year-old color negative film from a disposable camera, with never-before-seen photos of Nirvana’s time here by WORT volunteer Tyler Jarman taken during the band’s station visit in 1990.  This hour-long special put together and hosted by Kurt Stream is an audio companion to the featured story and newly unearthed photographs. We’ll hear music Nirvana’s entire 1990 Smart Studios sessions with Butch Vig and clips of Nirvana’s interview at our Bedford Street studios with volunteers Colleen “CC” Cronin, Tyler “Radio Ty” and Dean “Gein.” Kurt will also play additional rarities and interviews giving more details of the band’s time here, and has a message for WORT listeners: “If you show up to the live listening party at the Parched Eagle, there’ll be some bonus unheard Nirvana recordings from a certain live performance that we can’t air on the radio. It’s going to blow your mind!”  The July collectors’ edition of Madison Magazine hits newsstands on June 30.

Again, the special airs Friday, July 2 at 8 pm during the first hour of Beat Orgy. You ‘ll hear more about about how WORT plays a big part in the story, with the shots taken at the station by Tyler Jarman being the only known photos to exist of Nirvana taken while the band was in Madison.  Best of all, you have a chance to enjoy and talk about it with your friends at 89.9 FM’s live listening party at the Parched Eagle Brewpub, 1444 East Washington Avenue. Meet WORT people, we’ll hang out and listen together, we have door prizes and cool giveaways for everyone and we’ll all get to hear those super rare live recordings for the very first time. If you can’t make it this Friday night, please join our livestream at facebook/WORT FM. 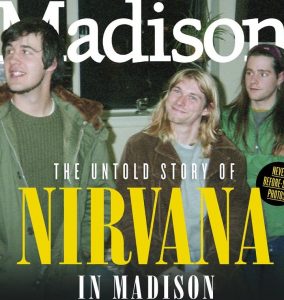 Writer Kurt Stream first approached 89.9 fm a few months ago after seeing the excitement around his feature story, since he’s got plenty of interviews and other audio material to make a great radio show. “I’ll play all 8 of the songs Nirvana recorded at Smart Studios (officially released with Nevermind’s 20th anniversary edition) and parts of the 1990 WORT interview in-between. I also have an array of vintage Nirvana interviews and audio clips where they talk about recording in Madison, and even some Butch Vig soundbites breaking down one of the songs they recorded at Smart.” Born and raised in Madison, Stream now lives in Tacoma, Washington. He worked as a soundman at O’Cayz Corral in 1999-2000 after earning a degree in audio engineering before moving out west. Hearing bits and pieces there about Nirvana’s first Madison show at O’Cayz and their interview at WORT over the course of 20-plus years eventually spurred his interest in their other ties with the city. When he realized the story had never been told before in full detail he thought somebody should write a more complete history, and the pandemic quarantine gave him time to work on the project. 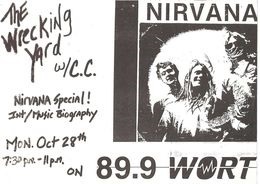 O’Cayz Corral on East Wilson St was one of Madison’s most legendary punk venues which later went up in flames. Most of the greatest bands of the ’80s and ’90s played there, including Nirvana’s debut in an opening slot in 1989. They returned in 1990 to record at Smart Studios with Butch Vig, who of course later recorded and produced “Nevermind,” which forever linked Madison to one of the most beloved rock albums of the century. 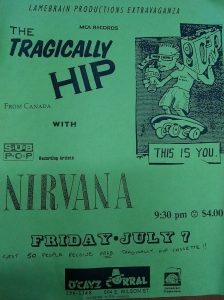 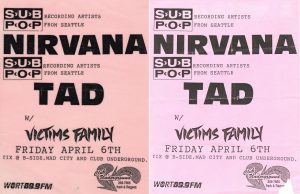 Legendary rockers Nirvana were pretty much unknown when they first played Madison in 1989, opening up for The Tragically Hip at O’Cayz Corral.

[flyers by the late Tom Layton of Lamebrain Productions]