On Friday September 7th, host Esty Dinur spoke with the award-winning author and visual artist Christine Stark about her recent book Nickels: a tale of dissociation. The novel deals with the difficult issues of  incest and physical and verbal abuse from the survivor’s point of view. It discusses how dissociation is employed as a means of coping. Stark explains how her motivation in writing the novel began with her social justice work around sexual violence. 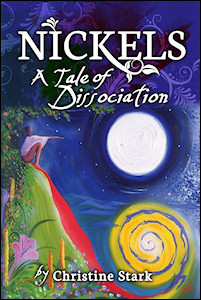 “Nickels follows a biracial girl named Little Miss So and So, from age 4-½ into adulthood. Told in a series of vignettes, Nickels’ lyrical and inventive language conveys the dissociative states born of a world formed by persistent and brutal incest and homophobia. The dissociative states enable the child’s survival and, ultimately, the adult’s healing. The story is both heartbreaking and triumphant”

To learn more about Christine Stark: