Headline: Wisco Boys Make Good!  Homegrown talent doesn’t get any better than the comedy coming out of this state, and this week WORT casts a spotlight on FFF. The hosts of the long-running, critically acclaimed Found Footage Fest returned to Madison with a live-hosted video show featuring Tape Trading Classics on Nov 20 at the Barrymore. Co-founded by videotape connoisseurs, aficionados and manipulators Nick Prueher and Joe Pickett, the Fest itself has become, just like its content, a cult favorite. Nick and Joe’s path to “living the dream” includes working with The Onion, Mystery Science Theater 3000, The Letterman Show, The Colbert Report and more. Ahead of the show, Rev. Velveteen & Bad Sister Heidi interviewed one-half of the trickster duo from Stoughton about how a hobby became an obsession, then a profession. 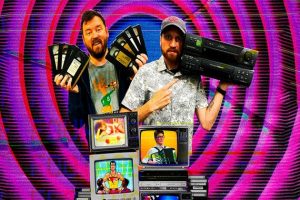 Above is an expanded version of the interview which aired on Psychoacoustics Radio Show Nov. 18 where Nick talks about the FFF origin story, doing live tours, how they obtain their materials (yes, they do take submissions!,) collaborations with popular comedy performers and film industry professionals, and how a dangerous, potentially world-dominating energy vampire took hold from a prank. Nick also spills some beans on fellow small-town Wisconsinite Mark Proksch, whose portrayal of a yo-yo “expert” they “managed” led him to a multi-year run on The Office and his current breakout role on What We Do In The Shadows? Listen to the whole thing to hear more about the future of found footage, the weekly VCR watch parties and how you might rent Nick and Joe for personalized video hijinx (no late fees or rewinding!)

The Found Footage Fest tours the Midwest regularly outside of pandemics and quarantines. Look for them at the Barrymore again next fall! 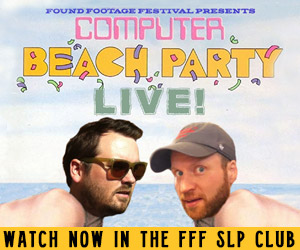 Also on Nov. 18, Psychoacoustics Radio Show took us on an audiophonic journey through the wonderful world of television music. From great themes to the credits, cool jukebox tunes and actors who sing, music casts its glow over our favorite TV shows. Catch this “Video is the Radio Star” special streaming on-demand until Dec. 2: just click here and scroll down to Thurs, Nov 18 to find Psychoacoustics or pull it up in the WORT App on your mobile device.