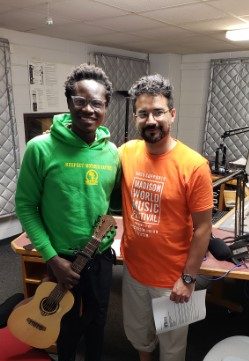 Ezé Wendtoin, musician, actor, activist and educator from Burkina Faso stopped by the WORT studios ahead of his 9/20/19 performance at the UW-Madison’s Union South. Martin Alvarado from Global Revolutions talked with Eze about his brand new album “Inzwischen Dazwischen“ and his mix of activism and culture. Most recently, his single “Sage Nein” became a viral hit. Originally a song by Konstantin Wecker written in the 1990’s, it’s powerful message against racism and Nazism is as relevant as ever. The video went viral as celebrities and Germans from all walks of life united behind it’s powerful message. You can see more about Ezé on his social media page.

We start with an acoustic rendition of “Sage Nein.”

Thanks to Lucian Rothe from the UW-Madison’s Department of German, Nordic and Slavic Studies. An edited version was broadcast on the Evening News on 9/19/2019.