On Monday March 18th, host John Quinlan interviewed Wenonah Hauter, the director of Food and Water Watch, who was in Madison  Monday night speaking at the Goodman Center at an event hosted by the Food Rights Network, a project of Madison’s Center for Media and Democracy. She just came out with the book “Foodopoly.” 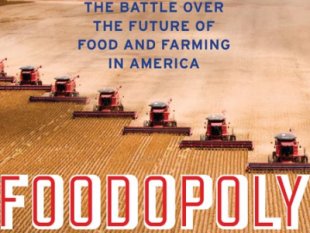 “Wenonah Hauter owns an organic family farm that provides healthy vegetables to hundreds of families as part of the growing nationwide Community Supported Agriculture (CSA) movement. Yet, as one of the nation’s leading healthy-food advocates, Hauter believes that the local food movement is not enough to solve America’s food crisis and the public health debacle it has created. In Foodopoly, she takes aim at the real culprit: the control of food production by a handful of large corporations—backed by political clout—that prevents farmers from raising healthy crops and limits the choices that people can make in the grocery store.

Blending history, reporting, and a deep understanding of American farming and food production, Foodopoly is the shocking and revealing account of the business behind the meat, vegetables, grains and milk that most Americans eat every day, including some of our favorite and most respected organic and health-conscious brands. Hauter also pulls the curtain back from the little-understood but vital realm of agricultural policy, showing how it has been hijacked by lobbyists, driving out independent farmers and food processors in favor of the likes of Cargill, Tyson, Kraft and ConAgra. Foodopoly demonstrates how the impacts ripple far and wide, from economic stagnation in rural communities at home to famines overseas. In the end, Hauter argues that solving this crisis will require a complete structural shift—a change that is about politics, not just personal choice.” -Food and Water Watch

Read more about Food and Water Watch and the book “Foodopoply:”