On Sunday, August 21 from 2 to 8 pm the public is invited to gather at the Harmony Bar for a toast to Jim Schwall, a creative and passionate musician, radio host and dear friend to WORT who will long be remembered for all his wonderful gifts to our community. Along with Chicago’s Corky Siegel, Jim was famous worldwide as a member of the Siegel-Schwall Band, whose existence spanned several decades with ten studio recordings and were well-received on many extensive tours. Jim was also a long-time community radio volunteer and his vast knowledge of many genres of music made him a versatile “utility player” among our on-air hosts. This culminated in a run of 5 years hosting WORT’s Tuesday morning folk program, which he called For The Sake Of The Song.

For decades Jim had been a substitute DJ for many different shows at the station, covering everything from classical to rock to blues to jazz.  But his true passion was fulfilled when he was hired as our Tuesday morning folk host, replacing John Fabke and Pastures of Plenty.  For Jim, SOTS was the show he felt was really the best showcase for his musical knowledge and love for acoustic tunes with a story to tell.

Jim is being remembered in a day-long celebration of his live at the Harmony Bar, 2201 Atwood Avenue from 2:00-8:00 pm on August 21. This day of music and memories features many of Jim’s regular collaborators including Andy Ewen, Joey Banks, Kenny Stevenson, Jimmy Voegeli, Josh Harty, Chris Wagoner, Mary Gaines, Maggie Weiser, Don Rembert, Chris Powers, Paulie Ryan, Frankie Lee, Tony Castaneda, members of Cajun Strangers and more. The event is free but all donations are welcome, and a portion of the proceeds will benefit Planned Parenthood. 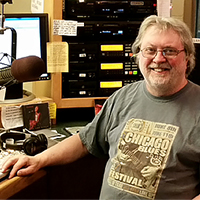