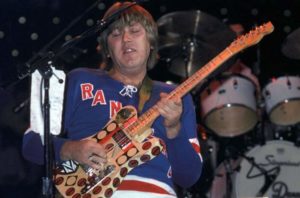 Terry Kath was the founding guitarist and vocalist of the popular rock group Chicago, from 1968 until his untimely passing in January 1978 at age 31. Kath was the recent subject of a documentary film “The Terry Kath Experience”, produced and directed by his daughter Michelle Kath Sinclair. Kath was inducted in to the Rock & Rock Hall Of Fame as a member of Chicago in 2016. The debut Chicago album, “Chicago Transit Authority”, was inducted into the Grammy Hall of Fame in 2014. Terry Alan Kath, a legendary musician and Midwest son, was born January 31, 1946, so this year’s special is celebrating the life and musical genius of Kath just a few days prior to what would have been his 73rd birthday. As in years’ past, expect the unexpected! Meaning… songs featuring Terry Kath’s uncanny guitar prowess that you may not have ever heard before, and special guest interview segments.

Quotes from other rock guitarists about Terry Kath: Jimi Hendrix (when talking to other members of Chicago), “your guitarist is better than me.” Steve Lukather, “I heard the story that Hendrix said, after he heard Terry play, that guy is the baddest guitar player I’ve ever heard in my life”. Jeff Lynne, “he was the most wonderful guitar player, the fastest I had ever seen.” Joe Walsh, “how in the world does he get a guitar to sound like that?”

For more information about Terry Kath: