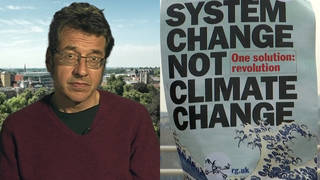 On Wednesday, the House of Commons became the first parliament in the world to declare a climate emergency. The resolution came on the heels of the recent Extinction Rebellion mass uprising that shut down Central London last month in a series of direct actions. Activists closed bridges, occupied public landmarks and even superglued themselves to buildings, sidewalks and trains to demand urgent action to combat climate change. Police arrested more than 1,000 protesters. Labour Party Leader Jeremy Corbyn told Parliament, “We are witnessing an unprecedented upsurge of climate activism, with groups like Extinction Rebellion forcing the politicians in this building to listen. For all the dismissive and defensive column inches the processes have provoked, they are a massive and, I believe, very necessary wake-up call. Today we have the opportunity to say, ‘We hear you.’” We speak with George Monbiot, British journalist, author and columnist with The Guardian. His recent piece for The Guardian is headlined “Only rebellion will prevent an ecological apocalypse.” Monbiot says capitalism “is like a gun pointed at the heart of the planet. … It will essentially, necessarily destroy our life support systems. Among those characteristics is the drive for perpetual economic growth on a finite planet.”