Brian Hirsh recently took over hosting Green Morning Radio from 9 am-noon Tuesdays, featuring folk and indie music both traditional and modern from all eras. “Gimmie Five” is a special treat where weekly guests are only interviewed, but asked to share and talk about five favorite tunes with our listeners. A number of local musicians and members of Madison’s music industry have taken him up on his offer, ranging from four- and six-string slinger, Isthmus writer and Wisconsin Public Television host Andy Moore to former WORT folk host, Nob Hill Boy and music curator John Fabke to Steve Sperling, manager and promoter of the Barrymore Theatre.  Thrilled with his success, Brian started courting more nationally and internationally-known artists with Madison connections like Milwaukee native/NYC resident Peter Stampfel, known for his work in the Holy Modal Rounders and The Fugs and most recently Cristina Marrs of Austin’s Asylum Street Spankers (archived here on demand through Dec 22.)

Nov. 24th‘s honorary WORT DJ (her “dream come true!”) was Kelly Hogan — a talented, highly versatile performer well known to Madison music lovers. Kelly was a punk-rock torch singer with Atlanta’s The Jody Grind and Rock*A*Teens till a series of tragedies made her seek new surroundings. She headed north, again quickly making a name for herself in Chicago as a solo performer and versatile session singer with such bands as The Mekons and Tortoise while working at the Hideout, an indie club central to the scene. She’s now appeared on tour and national TV with Neko Case and worked on many projects with Jon Langford and just about everyone else on Chicago’s Bloodshot Records label. While living near Evansville, Hogan was a frequent figure at area venues like Kiki’s House of Righteous Music where she once sang along with Robbie Fulks while seated atop a washing machine in the back of that infamous basement. Hear her share wonderfully entertaining tales of hanging with Mavis Staples, world travels with The Decemberists, and living and working in quarantine with Wisconsin’s graphic goddess/2019 MacArthur Genius Grant Winner Lynda Barry and her husband, and of course her excellent musical picks!

Most recently Kelly’s been busy with The Flat Five, Chicago’s beloved band of in-demand music biz ringers who, along with Hogan, are comprised of Nora O’Connor (Neko Case, The Decemberists, Andrew Bird, Iron & Wine) Scott Ligon and Casey McDonough (NRBQ) and Alex Hall (J.D. McPherson.)  Kelly often teams up with Nora as vocal support for Neko Case and the Decemberists, and the Five have wowed their Madison fans at several Kiki’s shows and a unique appearance at the Shitty Barn in Spring Green. Their new album Another World just dropped on Pravda Records. So stay tuned to WORT FM, you’re sure to hear this one getting plenty of spins! 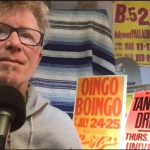