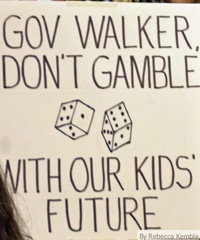 “Walker is scheduled to give his biennial budget address tomorrow evening, and has been strategically releasing bits and pieces of his budget proposal over the past few weeks. On Sunday his office unveiled proposals to vastly expand the private school voucher program to include school districts with more than 4,000 students that have at least two schools that are “failing” according to the newly created school report card system, and to create and fund two new programs: A special needs voucher program and a statewide charter school authorizing board that could authorize charter schools to be opened in school districts without the approval of local school boards.

Walker championed all three of these proposals during the last legislative session when they arose as separate bills. Although both the Assembly and the Senate are controlled by Republicans, all three measures failed to pass out of the Senate Education Committee. Republican senators that represent larger school districts were concerned about the loss of local control and revenue in districts that are hamstrung by the fiscal double whammy of massive cuts in state aid to public schools combined with state-imposed caps on the amount of revenue districts can raise in property tax levies.

By placing these and other controversial proposals into the massive state budget bill – a document that is likely to be 600 pages long – proponents of those measures avoid public hearings and separate legislative committee votes focused on one topic. Instead, the budget proposed by the Governor is vetted by the Joint Committee on Finance, which considers amendments over a four-month period before the two houses vote on it in June. There are usually four public hearings on the entire budget in different parts of the state, though these tend to be pro forma with most of the wheeling and dealing going on behind closed doors at the Capitol.”

Listen to the program: