On Thursday, August 20, we’ll be coming to you on all frequencies for National Radio Day. Radio was once one of the most incredible technologies on Earth – used by militaries and governments alike for navigation, news distribution, and more. It made news and music more accessible and brought us closer as a nation and a planet. Though today we rely more heavily on the internet and television for what we once relied on radio for, radio is far from dead and increasingly appreciated for its vintage and fantastic content.

Though we typically attribute the invention of the radio to Gugliemo Marconi in the 1890s, the process spanned decades, with many scientists making small but significant contributions to the understanding of electromagnetic induction, electric conduction, and radio waves. For example, Heinrich Rudolph Hertz discovered radio waves in the 1880s, which helped prove a theory of electromagnetism put forth by James Clerk Maxwell in 1873.

It took quite a bit of time after the discovery of the radio for the technology to be used as communication – this was both because the inventors hadn’t yet realized the practical and life-changing applications of their development and because there were many more components needed to transmit and detect electrical waves. However, Marconi finally figured out a way to communicate with radio long-distance, and he takes the credit for the invention of what we think of as radio today.

Public radio broadcasting has its own inventor and that’s Lee de Forest. He transmitted the first public radio broadcast, which featured the voices of opera stars, in 1910. De Forest’s Radio Telephone Company went on to manufacture the first commercial radios which could pick up a signal from miles away.

Obviously, radio was huge for music and changed the landscape of the industry immediately. News took to the radio, as well, and announcers could quickly hop on air to deliver the happenings of the day to a massive audience. The first radio news program was broadcast on August 31, 1920 out of Detroit – at a station that survives today as WWJ. In the early 20th century, radio also began to be used for broadcasting sports, aiding telephone services, and even navigating by airplane.

With the digital revolution and the wireless era, radio changed and adapted. Today, though radio is used for a variety of functions, it no longer holds its former top slot in entertainment and news media. With television, the internet, and more, it’s hard for radio to compete in that space – but people still love it, and it doesn’t look like radio is going away anytime soon. In fact, we appreciate radio even more these days for its old-school vintage. 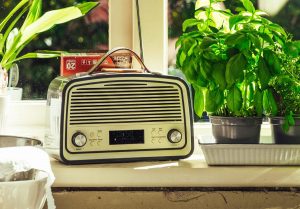 The first online radio station, Radio HK, was born in 1995. At the time, it was on the cutting edge of technology.

FM radio made its first appearance in 1939.

When famous director Orson Welles broadcast a radio piece that read excerpts from H.G Wells’ “War of the Worlds,” unsuspecting listeners thought it was real news, and that the planet was being attacked by aliens.

Proving it’s more than a medium to broadcast sporting events and news, radio served the United States as President Roosevelt held radio “Fireside Chats” to help lead the Nation through the Great Depression and World War 2.

Nicola Tesla came up with an early design for a radio long before Marconi got his hands on the technology!

“In radio, you have two tools:  sound, and silence.”

More than two-thirds of people surveyed listen to the radio in their car.

Two-out-of-three people surveyed listen to the radio every single day!

Nearly one-in-two love to sing along to the radio.

WOULD YOU WANT MORE OR LESS COMMERCIALS ON RADIO?

92.9%   Radio stations have too many commercials

WHICH OF THE FOLLOWING ARE TRUE FOR YOU?

When is National Radio Day celebrated? On August 20.

Are there events for National Radio Day?

Many radio stations celebrate the holiday in their own way – check out your favorite local station to see how you can get involved in the festivities!

Where is National Radio Day observed? The United States.

We all have a favorite radio station. You know, that one that just knows when you need to hear a sad song? That shares your exact political views? That telepathically plays the song you were JUST thinking about? Celebrate your station by giving them a boost on social media with the hashtag #NationalRadioDay. Last year, more than 200,000 tweets with that hashtag were sent out, and organizers are hoping to beat their record!

Radio isn’t big-budget as it once was and chances are your local radio station would welcome a helping hand. To keep public broadcasting alive, donations aren’t just helpful, but necessary. Think of it as paying them back for all the music and information you’ve received over the years.

Need a project? Pick up a fixer-upper radio from an antique or thrift store, and try your hand at getting it singing again. The work can be satisfying and you’ll learn a lot more about the science behind the radio!

Did you know that radio stations West of the Mississippi River use K as the first letter in their call signs, while those to the East use W?

In case you like singing along to “Let it Snow” in July, tune in to www.foreverchristmasradio.com, which is in its 12th year of broadcasting.

For 62% of shoppers, they’ve been listening to the radio just 14 minutes before heading in the store – what an advertising opportunity.

71% of people surveyed – more than two thirds – say they listen to the radio in their car. Do you?

Though today radio is great for busting the daily commute blues, keeping us up on the news, and preventing us from drifting off during road trips, it was once life-changing technology. Radio globally changed the way people interacted with the news, the government, and each other. From news anchors to FDR’s Fireside Chats that kept the nation going through rough times, radio has filled key gaps and done a lot of social good. Not to mention, it’s frequently used by the military and government to keep our country safe and for navigation! Radio has undeniably made its mark on the world.

And radio is still the least invasive, lowest maintenance, less expensive and most reliable way to get information and communicate during emergencies, when internet and power outages may occur. How many computers or devices can run on cheap, long-lasting batteries or solar charges and don’t require an internet connection? When has a radio ever required a sign-in, registered account or opt-out of targeted advertising and promotions?

Are you part of the 71% of people who listen to the radio in the car? We all know radio is not only what keeps you awake on a long road trip, but also what keeps you interested, learning new things, or singing along. We love radio because it helps us perfect our voices when we’re belting it out on the commute! And traveling to different places brings you a variety of new, unique and locally-focused content.

Whether it was alternative, country, or classic rock, everyone has felt that pause when a great beat comes on the radio, and you just know it’s about to be your favorite song. Credit to the radio for helping us all discover and experience new songs we might otherwise not have found!