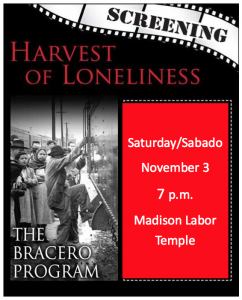 On Thursday November 1, our host Tony Castaneda spoke with Assistant Professor at the School for Workers at UW-Madison, Armando Ibarra. Armando speaks about Harvest of Loneliness: The Bracero Program, a documentary film that will be screened at the Labor Temple on Saturday, November 3 at 6:30. Armando will hold a discussion that will take place after the screening of the film, focusing on working conditions and immigration issues that are present in our society today. He assisted with the making of the film as a graduate student with film makers Gilbert Gonzalez and Vivian Price.

Armando explains the Bracero Program, “This was a state managed labor importation program that took place between the US and Mexico from 1942 – 1964. The program has had massive impacts on Latino communities that most of us don’t understand, including those that study these communities. Many people’s grandparents and parents today were braceros.” He explains that the program was a system of labor recruitment, put into place by control of the growers. People from all regions of Mexico applied for permits, after which, if they were selected, would be placed through a processing station in the US, where they would be hand picked to be sent to farms across the US. By the end of the process, they were screened by both the Mexican and American governments, as well as the corporate growers. “There was absolutely no agency on the part of the workers in this whole process,” Armando says. The migrant workers were predominantly from rural lands who considered this offer as a good opportunity for themselves and their families. However, they soon began to see the harsh reality of the situation, “this was an abundant source of cheap, exploitable, replaceable, and deportable labor. That was the beauty of this program for corporate growers.”

Armando reports that the plight of migrant workers has, for the most part, remained unchanged. He estimates that 25% of all the food consumed in the United States is grown in the central valley of California; And, on a yearly basis, 1.2 million farm workers, mainly Mexicans, apply their efforts towards producing that food, “The food you consume is being produced by Mexican hands, and…primarily ‘unauthorized people’, as we label here.” He speaks about the connection between food production and the current immigration laws and issues that are present in the United States today.

The screening will take place Saturday November 3, at 7:00 pm at the Madison Labor Temple. Food will be served at 6:30 pm.