On Wednesday February 27th, host Karma Chavez interviewed University of Wisconsin professor Michele Hilmes about the history of radio in the US and the UK. She is a historian of broadcasting and Professor of Media and Cultural Studies at the University of Wisconsin-Madison. For more than 20 years she has taught classes in the history of broadcasting and in various aspects of broadcast texts, industry, and representation.Hilmes is author of the book, “Radio Voices: American Broadcasting, 1922-1952.” 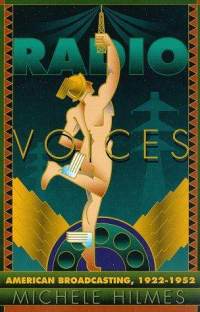 “Don’t expect a sentimental journey through radio’s Golden Age in Hilmes’s well-researched study. Jack Benny, Orson Welles and the soaps are all here, in passing, but the agenda is serious sociology: the dialectics of American culture as reflected in this “lost” medium. Hilmes presents radio as an ongoing battle to first define, then exploit, a changing America by a shifting cast of power brokers. It didn’t take long for the 1920s invention to be wrested from the amateurs by the moguls of commerce: networks, sponsors and, most powerfully, ad agencies. Hilmes then examines their attempts to bring into a big new “imagined community” all the tensions of a very diverse society, as when racial stereotypes are spun into a narrative that transfixes white America in Amos ‘n’ Andy. Women are ghettoized to the soaps and daytime programming while at night Hollywood voices try both highbrow and lowbrow bait in comedy/variety and drama. WWII further strains the disenfranchised members of radio’s utopia, before TV inherits the whole mess. Hilmes, who teaches communication arts at the University of Wisconsin and is the author of Hollywood and Broadcasting, backs up her theses with fascinatingly cynical memos from the incunabula of J. Walter Thompson and NBC, as well as comments from an impressive chorus of social scientists. Her writing, alas, suffers from too many phrases like “naturalizing strategic cultural hierarchies behind the screen of gender destruction.” This should not deflect readers, however, who are willing to sacrifice radio’s golden Oz to meet the often forgotten men and women working the levers behind the curtain.”