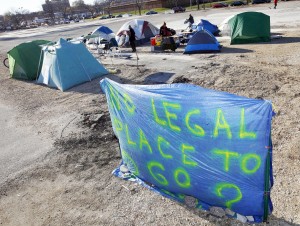 According to the group Porchlight Inc. which attempts to find solutions to for the homeless population in Madison, “In Madison in 2008 the homeless population rose to its highest level since 2000 with the largest increase in families with children. Though this number has decreased, in 2011 more than 2000 people were turned away from shelters because of lack of space.

Top Causes of Homelessness in Our Community:

Households with incomes below the poverty level account for the vast majority of people entering homelessness. Over 18% of people in our community live in poverty.

Violence or the Threat of Violence

38% of families and 24% of single women in Madison report that violence or the threat of violence in the reason for their homelessness.

The causes of homelessness are complex. In addition to poverty, violence and mental health other factors include illness, physical disability, divorce or even an honorable discharge. For many multiple factors combine to force an individual or family into crisis.”