Since 2008, the Freedom Flotilla movement has sent thirty-five ships attempting to break Israel’s illegal, US-backed military blockade of Gaza that has denied two million people, including children, access to food, clean water, fuel, medicine, and other necessities for the past thirteen years. This week, the Gaza Freedom Flotilla’s North American Boat is in Madison to raise awareness for the crisis in Gaza, hosted by the Madison-Rafah Sister City Project.

On today’s episode, guest host Gil Halsted learns more about the Freedom Flotilla movement and has a broad discussion of human rights in Palestine, the anti-BDS resolution in Congress, and breaking cycles of war and violence with Kit Kittredge from the Freedom Flotilla Coalition and Kathy Kelly, co-coordinator of Voices for Creative Nonviolence. 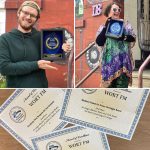