Earlier today, as a strong breeze blew off Lake Mendota, a group of about half a dozen people were hacking away at a block of snow and ice outside Yahara House on the city’s east side.

The block was eventually destined to become a catfish. But, as of 11 AM, it still lacked many of the finer details — and more closely resembled a log with a mouth.

Today’s event was hosted by Yahara House, a community organization that provides services to Madisonians with mental illness.

Brad Schlough is the House’s director. He says that the event was equal parts community art project and an attempt to draw attention to the issues the organization is facing. Like many community non-profits, the pandemic has had a dramatic impact on Yahara House over the past year.

“This last year with COVID has been really tough on Yahara House,” Schlough says. “What we are here is a community that is used to working side-by-side everyday on everything that happens with the clubhouse. We’ve been forced to resort to Zoom, tele-health and taking work to members’ homes to have them do it and so forth.”

He continues: “We depend on businesses to provide jobs where we then use a transitional employment program. So we support members in those jobs, members don’t have to interview for them. They’re kind of selected here at the clubhouse and then staff go with them, train them and then members stay in those jobs for six to nine months.”

Sonja Trevors has been a member at the clubhouse for about eight years and primarily works in Yahara House’s Catfish Cafe. She says that Yahara House, and its programs, have provided more for her than traditional forms of therapy.

“We made a homemade lunch every day before COVID. We would make a homemade lunch every day and we’d serve it to members of the staff. And it was delicious,” Trevors says. “[Yahara House] is one of the best things that’s ever happened to me in my mental illness. It’s just helped me out so much, more than any other therapies or medications. It’s been about the relationships and just building up my self-worth.”

Today’s project was led by the Milwaukee-based snow and ice artist Jim Malkowski. He says the first step in creating an ice sculpture is, unsurprisingly, finding enough ice.

“A few days ago the members built this here ice block,” Malkowski explains. “You can’t just carve into a mound of snow, it’s too soft. They actually packed snow into a plastic tote-like container and made snow blocks and stacked them with packed snow in-between them. And that’s where this snowblock came from.”

From there the process bears a strong similarity to traditional sculpting.

Malkowski, who was joined today by a small crew of about three people, gradually hacks away at the block-like structure, continually refining the shape until it reaches the general vision outlined in the concept art — which was drawn by a Yahara House member. To reach that point, they use more than a dozen tools, ranging from blunt-force objects like a snow shovel to something that resembles a large cheese grater.

Malkowski is no stranger to practicing his art in harsh environments. Ice carving is, after all, a winter sport — and Wisconsin is not known for its mild winters. Which means last week’s sudden heat wave could have spelled disaster for today’s event.

But, he says that the warmer weather actually makes the job easier. The constant thawing and freezing of the ice block makes it easier to carve.

“It’s different every time we do something,” he says. “It’s always too hot or too cold or whatever. But it’s perfect today, because it got cold last night and it got crispy. And that’s really the best snow.”

But, just as spring always comes, the catfish will one day fade away — melting and eventually flowing back into nearby Lake Mendota.

“That’s just the way it is. It’s an environmental thing and it’s eventually going to return where it came from,” Malkowski says. 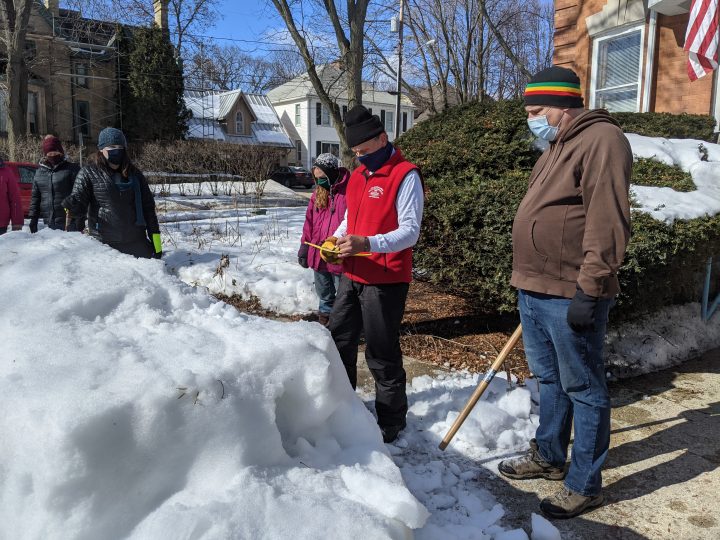