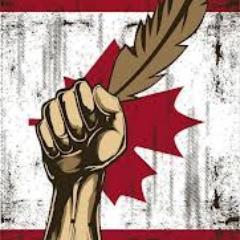 According to their website, “Idle No More grassroots founders and organizers from across Canada, in solidarity with Common Causes—a new initiative bringing together social justice, environmental, labour and other activist groups—are planning a national and worldwide day of action on January 28th, 2013. This day of action will peacefully protest attacks on democracy, Indigenous sovereignty, human rights and environmental protections when Canadian MPs return to the House of Commons on January 28th. As a grassroots movement, clearly no political organization speaks for INM. This movement is of the people for the people. The vision of INM revolves around Indigenous ways of knowing rooted in Indigenous sovereignty to protect water, air, land and all creation for future generations. The Conservative government bills beginning with Bill C-45 threaten Treaties and this Indigenous vision of sovereignty. The goal of the movement is education and to revitalize Indigenous peoples through awareness and empowerment. INM has successfully encouraged knowledge sharing of Indigenous sovereignty and environmental protections. This message has been heard around the world and the world is watching how Canada responds to the message sent by many INM supporters. INM urges the government of Canada to repeal all legislation which violates Treaties, Indigenous sovereignty and subsequently environmental protections of land and water. INM is grateful to many leaders who have supported this vision and the movement of the grassroots people. “The Treaties are the last line of defense to protect water and lands from destruction,” stated Oren Lyons, Faithkeeper Turtle Clan, Onondaga Nation Council of Chiefs.”

Read more about Idle No More:

Listen to the entire Program: