Jamie’s WORT family and friends wish to express our heartfelt condolences on the loss of one of Madison’s most outgoing, recognizable and supportive music fans.  Jamie Cowles was one of a kind and we greatly miss his passion, his humor and his generosity.

Per his wishes, memorial donations in Jamie’s name can be made to WORT, the Madison radio station he supported and for which he did special shows as “Jamie the Crawlin’ Therapist,” carefully curating and co-hosting specials on the history of punk and more with Bill the Walkin’ Doctor. 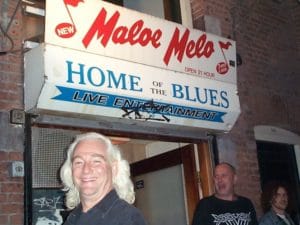 [Photo of Jamie in Amsterdam by Rev. Velveteen Sly]

A well-loved and highly recognizable figure on Madison, WI’s East Side, Jamie was known for his larger-than-life presence characterized by his enthusiasm for punk rock, long history in the local music scene, and his striking hairstyles, which morphed through the years from long hippie pony tail to bleached blond mohawk to what he referred to as his “Gwyneth.” He also appreciated it when people referred to him as Gandalf. At any given Madison music festival or rock show, Jamie would announce, “these are my people,” and move through the crowd, hugging and kissing countless folks who knew and loved him, and whom he loved back. He used to say, “If you don’t go out, you can’t find out”–thus, he went out aplenty.

Jamie tended to keep his friends for life, even when scattered across the country, conscientiously calling on birthdays (rewriting the dates every year in his new calendar) and traveling several times a year on friendship tours. Even if someone fell away, he would reach out to repair the relationship, waiting patiently for reunion. To his best friends, Jamie offered unconditional love, and to all, he offered playful and creative nicknames as a sign of special connection. One of his favorite weekly events was “Tuesday Night Club,” a beer and talk-fest which he maintained for over 25 years.

Jamie had a wide range of interests and pleasures. A discophile and keen music fan, he scoured record stores for rare finds from the ongoing list he kept. In addition to collecting music, he had an amazing array of beer and band t-shirts, as well as all things skull. He rode 34 RAGBRAIs (epic IA bike rides) with “Team Sprint Selzer.” As a longtime member of the Madison Home Brewers and Tasters Guild, he was proud of his eventual rise to power as the Ice Czar for their annual event, the Great Taste of the Midwest. He and friends held season tickets for 13 years to the Lyric Opera of Chicago. He read the entire New York Times every morning and never drank coffee. He was a phenomenal conversationalist and loved meeting new people and flirting voraciously.

Jamie was the eldest of six, born to Betty Miller Cowles and Rollin James Cowles III. His close relationship with his mother was sustained throughout her life. He loved the “Rabbit” and she loved her “Little Jewel.”

After being born on October 25, 1949, Jamie lived in a house named Cynclyf that was surrounded by woods along the Mississippi River in Burlington, IA. Jamie and friends played “Cowboys and Indians” with real guns that they could buy mail order by stating they were old enough. No one died, but Jamie got a bullet in his calf muscle while a friend was cleaning his gun.

Jamie graduated from Burlington High School, Class of ’67, where he swam, played tennis, and was on the school government with plans to be a future Iowan Republican Senator. In high school he also got his first car, a 1963 red/black Karmann Ghia, which he always said represented his first step towards adulthood. He attended William and Mary from ’67 to ’69, when he was put on probation for having women in his room against the rules. He remained attached to the school, however, and felt his intellectual growth began there. Transferring to UW-Madison for its more relaxed social environment, he received a Political Science degree, magna cum laude, in 1972. Professor Harvey Goldberg became his hero, altering Jamie’s worldview forever. In college Jamie was also an anti–war activist and engaged in expanding his mind.

Shortly after graduating, Jamie moved with 3 friends to Marble, CO, population 28. Jamie helped lead a successful resistance movement against a ski resort hoping to build in the town. In 1973, Jamie and then-partner moved to Better Life Mosquito Farm in Mazomanie, WI, where they lived a happy, love-filled hippie life. Always on his spiritual path, Jamie was one of the 1500 in attendance when H.H. the 14th Dalai Lama held the first Kalachakra outside of Asia, in Madison in 1981.

Having a massage in Seattle for the first time, Jamie experienced a profound conviction he had found his calling in life and attended the Santa Fe College of Natural Medicine, graduating in 1982. Back in Madison, he continued his healing education with a Physical Therapy Degree, participating in a student-led reorganization of the School of Allied Health Professions and graduating with honors. During his internship, he realized that he could never work under someone else and so hung out his own shingle.

In Madison, Jamie had a private practice for 34 years as a PT and Massage Therapist, famed for his manual skills and knowledge, which he combined with political and counseling conversations with clients on the massage table. At the time of his death, he was deeply looking forward to retiring in May of this year.
Jamie’s intellectual drive propelled a passionate curiosity about political history and current events throughout his life, and he was able to recall and keep straight minute details about complex political situations and a very wide array of subjects. More recently, he had become interested in the American Civil War, which he saw as a key to understanding subsequent events in this country, and he made numerous pilgrimages to Civil War battlefields. Other high points in his traveling life were yearly trips to Amsterdam and Belgium and all they had to offer him. He particularly enjoyed the Van Gogh Museum, which he always hoped to visit with his mother.

As an old friend said, “He was the most genuine person I have ever known, the most utterly comfortable being himself. I cannot believe we have lost him so soon.”

In addition to other services and celebrations, a private puja for a good rebirth was performed for him at Deer Park Buddhist Center and Monastery in Oregon, WI.