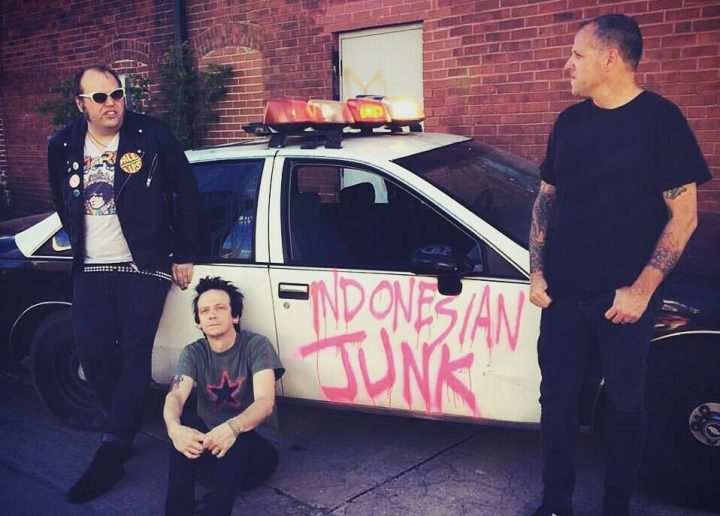 WORT’s D.J. el Serpentine plans a special pledge drive edition of “The Rattlesnake Shake” rock show this Friday from 8-11 pm CDT. Regional glam-punk power-trio INDONESIAN JUNK (from Milwaukee) are scheduled to release their new album “Spiderbites” (Rum Bar Records) on Friday Sept. 27, and to celebrate the occasion they are performing a live set on WORT during “The Rattlesnake Shake.” The Indonesian Junk performance will start in the sweet spot of 9:00 pm and conclude with an interview with the band members. This live WORT set will be the Madison record release party for Indonesian Junk’s “Spiderbites” album!

From the Indonesian Junk press kit bio: “These glam punk dirtbags from Milwaukee specialize in big ol’ catchy power pop hooks, while their tuff as leather riffs and blistering solos make the scariest metalheads blush. They’re frequently compared to the sleazy 1970s New York underground, and while they’ll gladly accept those charges don’t you dare call them a nostalgia act. The Junk first pounced on the scene in 2014 with some home recorded demos by Chinese Telephones guitarist / Ramma Lamma bassist Daniel James, who quickly recruited the powerhouse rhythm section of Johnny Cyanide (bass) and Mike Mattner (drums). They’ve been cranking out LPs, 45s, and live tapes at a consistent pace while touring the Badstreets of the USA ever since.”

“Coming off a brilliant sophomore LP Stars In The Night that cracked my 2017 top ten, Indonesian Junk keeps the momentum going with this fantastic EP. This is some of Daniel’s strongest material yet – touching on his numerous influences yet still bearing his distinctive style. Highly recommended!” – FASTER AND LOUDER

“Raunchy and devilish. Indonesian Junk really put the hooks in me. With a NY Dolls, Dead Boys, Lords of the New Church meet 70’s era Rolling Stones vibe, how could anything possibly go wrong?” -JERSEY BEAT

“Their most flamboyant release to date… A psychotic strut covered in dirt and grease and bar sweat and dried blood with an Exile on Main St era Stones-esque cadence… Darkness Calling is sick, morbid, and a bit unnerving. It’s also a whole lot of fun. You might want to load up on hand sanitizer before playing with Indonesian Junk, but play with them you should.” – UNDER THE COUNTER TAPES

“Instrumentally, James, bassist Johnny Cyanide, and drummer Mike Mattner might be tighter than ever on this release, and that’s a promising sign for where the band is headed. Indonesian Junk are putting out high quality music that expands beyond the realm of punk rock while keeping the ethos.” -BREAKING AND ENTERING

“Great chunks of melodic, foot stompin’ rock’n’roll, like some kinda collision between the Ramones and Cheap Trick… the kind of hard-hitting guitar-assault that Thunders and Sylvain used to work so well.” – FEAR AND LOATHING

“The band have a knack of delivering a sleazy punk rock sound that manages to stay cheap but not nasty. It’s a respite from the overly earnest, i.e. boring, music that makes up so much of the punk rock genre these days.” – SOUL OF A CLOWN