On Tuesday October 16th, host Cynthia Lin talked with professor Stephen Sheehi about his recent book, “Islamophobia: The Ideological Campaign Against Muslims.” Sheehi is Associate Professor of Arabic and Director of the Arabic Program at the University of South Carolina. 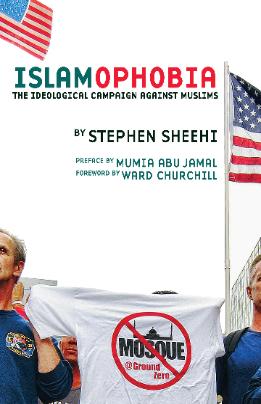 “Islamophobia: The Ideological Campaign Against Muslims examines the rise of anti-Muslim and anti-Arab sentiments in the West following the end of the Cold War through GW Bush’s War on Terror to the Age of Obama. Using “Operation Desert Storm” as a watershed moment, Stephen Sheehi examines the increased mainstreaming of Muslim-bating rhetoric and explicitly racist legislation, police surveillance, witch-trials and discriminatory policies towards Muslims in North America and abroad. The book focuses on the various genres and modalities of Islamophobia from the works of rogue academics to the commentary by mainstream journalists, to campaigns by political hacks and special interest groups. Some featured Islamophobes are Bernard Lewis. Fareed Zakaria, Thomas Friedman, David Horowitz, Ayaan Hirsi Ali, Irshad Manji, George W. Bush, Dick Cheney, John McCain, Hilary Clinton and Barack Obama. Their theories and opinions operate on an assumption that Muslims, particularly Arab Muslims, suffer from particular cultural lacuna that prevent their cultures from progress, democracy and human rights. While the assertion originated in the colonial era, Sheehi demonstrates that it was refurbished as a viable explanation for Muslim resistance to economic and cultural globalization during the Clinton era. Moreover, the theory was honed into the empirical basis for an interventionist foreign policy and propaganda campaign during the Bush regime and continues to underlie Barack Obama’s new internationalism. If the assertions of media pundits and rogue academics became the basis for White House foreign policy, Sheehi also demonstrates how they were translated into a sustained domestic policy of racial profiling and Muslim-baiting by agencies from Homeland Security to the Department of Justice. Furthermore, Sheehi examines the collusion between non-governmental agencies, activist groups and lobbies and local, state and federal agencies to in suppressing political speech on US campuses critical of racial profiling, US foreign policy in the Middle East and Israel. While much of the direct violence against Muslims on American streets, shops and campuses has subsided, Islamophobia runs throughout the Obama administration. Sheehi, therefore, concludes that Muslim and Arab-hating emanate from all corners of the American political and cultural spectrum, serving poignant ideological functions in the age of economic, cultural and political globalization.”