On Thursday August 30th, Allen Ruff interviewed Craig Corrie about the recent verdict from an Israeli Judge regarding his daughter, Rachel Corrie’s death. Judge Oded Gershon rejected the parent’s negligence lawsuit, stating that Corrie’s death was an accident that she brought upon herself. Over nine years ago in March of 2003, peace activist Rachel Corrie was killed by an Israeli military bulldozer in the Gaza Strip. Every since her death, her parents Cindy and Craig Corrie have sought justice for their daughter’s murder as well as continued her vision of peace through the The Rachel Corrie Foundation for Peace & Justice. Craig and Cindy say the judge’s verdict that Israel was not responsible for her death has “deeply saddened and deeply troubled” the family. 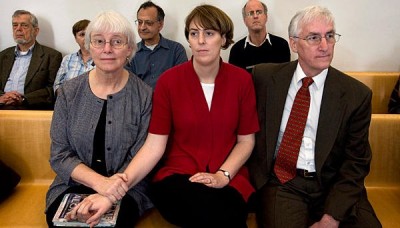 The Foundation which Rachel Corrie’s parents started after her death “continues the work that Rachel Corrie began and hoped to accomplish, and carries out that work with her vision, spirit, and creative energy in mind. We conduct and support programs that foster connections between people, that build understanding, respect, and appreciation for differences, and that promote cooperation within and between local and global communities. The foundation encourages and supports grassroots efforts in pursuit of human rights and social, economic, and environmental justice, which we view as pre-requisites for world peace.”

To learn more about The Rachel Corrie Foundation for Peace & Justice:

To listen to the interview with Craig Corrie: