This story has been edited to correct leading language, and to include an open letter from Madison alders.

During Tuesday’s common council meeting, during which alders virtually met for nearly nine hours, someone did not realize their mic was unmuted.

And called a constituent a word we can’t say on the radio.

The misogynistic slur was uttered hours into Tuesday’s city council meeting. The Common Council had just finished passing resolutions to create two long-standing demands from the community — an independent police monitor, and a civilian oversight board for the Madison Police Department– and was just moving on to a resolution to provide funds for downtown businesses.

The slur seemed to be directed at Shadayra Kilfoy-Flores, a member of the community who is regularly involved in city meetings and had testified earlier in the evening, before she began to speak.

The incident gained attention on Twitter, and was later picked up by other community leaders and journalists. Kilfoy-Flores says she found out because someone sent it to her.

“Listening to it, I was trying to figure out if he was calling me that or was he calling the mayor that? Either way, it’s disgusting and foul. Regardless of who he’s using that language towards, it’s violent and it’s abusive language,” says Kilfoy-Flores.

Many attributed the expletive to Alder Paul Skidmore, whose voice sounds similar to the voice who used the word.

WORT reached out to Alder Skidmore to confirm or deny yesterday and today, and he did not return our calls or email. The Capital Times reports Alder Skidmore denies saying it, writing, “I don’t say things like that. I don’t use vulgarity in meetings, and I don’t use it outside of meetings. It’s not acceptable.”

Skidmore was the last alder to speak before Mayor Satya Rhodes-Conway before the expletive was uttered.

Skidmore also had issues throughout the meeting with muting and unmuting his end of the call.

Yesterday, Mayor Satya Rhodes-Conway and Common Council President Sheri Carter issued a joint statement condemning the use of the misogynistic insult directed at a member of the public. The statement calls for alders to “come up with systems for us to hold each other accountable outside of elections,” and points to the President’s Work Group on Administrative Procedures to develop such processes.

Kwasi Obeng, Chief of Staff for the Council says, currently, there’s only a written use policy for alders regarding social media. However, an alder workgroup on administrative procedures, staffed by Alders Marsha Rummel, Barbara Harrington-McKinney, and Keith Furman, recently met to create more professional standards for alders.

City attorney Michael Haas tells WORT that ethics violations, which involve matters of financial interest, don’t apply here. But the Madison Common Council could issue a resolution censuring the speaker at an upcoming meeting, or start an investigation into the incident.

Haas adds that in egregious cases, like misconduct, under state statute, a resident can file a “verified charge” to claim that an alder should be removed. That would spark a complex process involving a public hearing from the Common Council.

Kilfoy-Flores says that the use of the misogynistic slur is a violation of the community’s trust in its elected officials.

“You’re someone who holds power,” she says “The fact that this is an abuse of that power, and an abuse of trust…Part of why we elect officials is out of trust. And his constituents trust him to represent them. I would say this is probably not a way in which they would like to be represented.”

Kilfoy-Flores says she has sent a complaint about the incident to Alder Marsha Rummel, who did not return WORT’s request for comment today.

Late Thursday evening, a dozen Madison alders sent an open letter condemning the use of the word. The alders also condemned the framing of the incident presented by Mayor Rhodes-Conway and Council President Sheri Carter. The letter read, in part, “We disagree that the “culture and civility” at our meetings have deteriorated in recent months. What has changed in recent months has been an increased outpouring of public comment and debate about the value of Black lives and the accountability of public agencies and elected officials.” 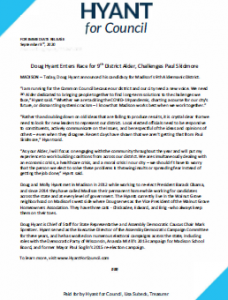 The incident also prompted a campaign challenge. Doug Hyant, who posted about the incident on Twitter during the meeting, announced Thursday that he plans to challenge Alder Skidmore’s seat, which represents the west side of Madison, in 2021.

Hyant, who is Chief of Staff for State Representative and Assembly Democratic Caucus Chair Mark Spreitzer, says he’s thought about running for a while, but this was the tipping point.

“I was honestly pretty shocked, this is not something you expect to hear when you tune into the Madison Common Council,” Hyant says. “For that to be the response to someone who, just like me, was up at 2:45 in the morning having listened to eight or nine hours of public comment. To be at that point, and that to have that happen, it hurt. That shouldn’t be okay.”

Hyant would be challenging an incumbent with 19 years on the Common Council. Alder Skidmore was one of two alders to not vote for the community control measures.