In late September, a small WORT contingent attended the 2022 Community Changemaker Awards at UW-Madison’s Union South. Presented by Community Shares of Wisconsin, the event highlighted local leaders and organizations helping to advance social and environmental justice in our community.

It was there that Jan Miyasaki, host of the Wednesday 8 O’Clock Buzz, received the “Backyard Hero” award from Community Shares, for her many years of highlighting CSW member nonprofits and her steadfast commitment to social justice through her broadcasts.

“Not only is Jan an excellent talk show host for CSW member community radio station WORT, but she is very long-time leader and activist in the community working on the issue of human trafficking and providing services to abuse survivors, mostly through her program, Project Respect,” said CSW Executive Director Cheri Dubiel in presenting the award.

“Jan has been bravely speaking out on behalf of human trafficking victims for decades and deserves so much more than this award. But we know that this award is especially meaningful to her because of her commitment to the program,” Dubiel added.

Frequent listeners of the Wednesday 8 O’Clock Buzz know Jan’s show has been focused on serving the public good for nearly thirty years. Invited guests on the show highlight issues in equity, environmental justice, health, labor — with a smattering of international issues and cultural events. 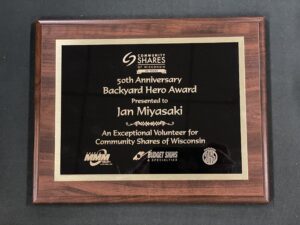 Miyasaki learned of the award herself live on the air in September, during a show dedicated to this year’s CSW award-winners: Dana Pellebon from the LGBTQ+ Community Center, Phyllis Greenberger, Lead Advocacy Specialist from Disability Rights, and Elisabeth Lambert from the ACLU of Wisconsin.

And during the awards celebration, Miyasaki was quick to recognize and chat with others in the CSW sphere, who themselves have dedicated their lives to serving the public good. “It’s good company,” she said, about the people in the room.

Miyasaki first became a WORT volunteer in the mid 1980s as a reporter on Her Turn, WORT’s Sunday morning news broadcast from a feminist perspective. In the mid-1990’s, she became part of the 8 O’Clock Buzz lineup, and has stayed in the position for nearly thirty years.

Outside of her broadcasting career, she is the Director of Project Respect, a local social service agency that provides services to adults and juveniles victimized in sex trafficking and prostitution. She holds a J.D. from Marquette University Law School and is a faculty member in Ethnic Studies at UW – Madison.

Congratulations to Jan on her impressive career, and our thanks for her steadfast support of the community through her program!