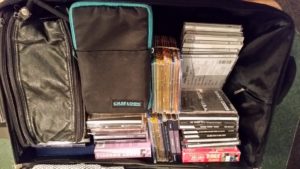 Gary Alderman has been hosting WORT’s Journeys Into Jazz program for the past 35 years (!)  He’s been a DJ for the last 37 years. Gary is also a jazz historian and sells rare and out-of-print jazz vinyl and publications. He has over 60,000 jazz LPs and 8,000 jazz CDs in his collection. Find out about the man behind the music!

Gary is from Syracuse, New York but came to Madison in 1962 to pursue his college education. He started out as a weekly special guest on Journeys Into Jazz back when Danny Kahn was the host. When Danny stepped down from hosting the show, he chose Gary to be his successor.

In addition to feeding his love of music through the radio, Gary says that he likes to motivate others by being enthusiastic and sharing his knowledge with them. When he is faced with criticism, he says that he appreciates the positive comments he receives but when it comes to negative comments, he states “most of it is based on lack of knowledge, or opinionated”. Gary defines success as having people respect you, not only at work, but in the community as well.

As far as role models on the radio are concerned, he admires DJs from the 1940s and 50s. He liked Symphony Sid because he was very hip and harmonious with fellow musicians, Mort Fega because he played new material and had good taste and presentation,and Ken Ohst because he was succinct, informative, and professional.

The goal for Gary’s show is to make jazz lovers feel good with some music they know and some they don’t!