As many of our listeners know, when long-time Diaspora host Terry O‘ announced he was not going to return to WORT from his sabbatical earlier this summer the four hosts who had been filling in, George Dreckmann (G-Man,) Gloria Hays, Paul Novak and Jeff Spitzer-Resnick, agreed to continue to rotate hosting of the Thursday morning world/folk music slot through the end of August. They also renamed the show Hejira (pronouncedˈhejərə) which offers continuity to the former Diaspora name as it means exile, stemming originally from Mohammed’s exile from Mecca to Medina. Hejira is also the name of a famous Joni Mitchell album with a local connection, as all the cover art was photographed in Madison on Lake Mendota.

Starting on September 2, the Hejira show (which airs Thursday mornings from 9 am-noon) will have a full time host: (drum roll, please)…..Jeff Spitzer-Resnick. While Jeff has hosted a wide range of shows on WORT throughout the years including blues, rock, jazz and gospel, he has become a world music expert as a substitute host of the PanAfrica, Diaspora and Hejira shows. 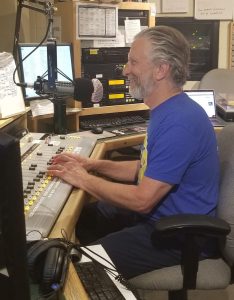 (Jeff hosts the first live in-studio Hejira show, kicking it off with a song from Joni Mitchell’s album)

Thus far, Jeff has started his Hejira shows with a song from that famous Joni Mitchell album, and closed the show with a song from one of Joni’s many other albums. But as the show evolves, that may change. As for the rest of the 3 hour show, Jeff promises to continue to play music from all over the world, featuring new releases and music that listeners are unlikely to hear anywhere else. Some shows will have a theme, such as music from a particular country or region, or feature a particular artist, perhaps because they have recently died or are coming to town.

He’ll also continue to explore new music, whether through shopping at one of our fine local record stores, bringing home music from his international travels (COVID permitting,) digging into new releases from the WORT library or attending WOMEX (World Music Expo.) In fact, he just applied to be a juror at next year’s Folk Alliance International Conference. His goal is to continue to expand listeners’ horizons with music from all over the world.

Just like all music hosts, Jeff will ask other WORT hosts to sub for him from time to time, so if you miss the G-Man, Gloria Hays, Paul Novak or DJ SpinCycle (Ankur Malhotra,) you’ll certainly get to hear them host Hejira from time to time.

There is a Hejira World Music Radio Show Facebook page. You can like it to follow the show and receive announcements about new world music and special features on upcoming shows. You can also send messages to Jeff to request music on upcoming episodes or ask questions about the show.

Don’t forget that, just like everything heard on WORT, the Hejira show streams live online on the WORT website as well as through the WORT-FM app, available for free from your favorite app store. In addition, just like all music shows on WORT, Hejira is archived for two weeks after each show so you can listen to it again, or catch it if you missed it through the Audio Archives tab on our website. Playlists are available on our website, and Jeff will also post them on the Hejira Facebook page.

The Hejira logo was designed by locally based graphic artist Tsela Barr and symbolizes the joy of music from all around the world. WORT and Jeff truly appreciate her in-kind contribution to listener-sponsored community radio.