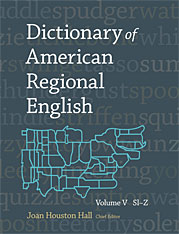 On Friday, December 21, our guest host Jan Levine Thal speaks with Joan Houston Hall, Chief Editor of the Dictionary of American Regional English. She speaks about the new companion volume to the dictionary, Volume 7. The volume features “212 ways of saying someone is stalling.”

Joan speaks about regional words. ‘Scrid’, for example, is a New England word which means ‘fragment of something.’ She finds that “it seems that when a word is introduced that fills a need, it is adopted widely across the country very quickly.” The word “grid-lock,” Joan says, was quickly adopted across the country wherever situations like that came up. However, “the words that are regional that we use with our friends and families, tend to stay regional.” Joan provides the example of grandparents: from granny, grandma, nana, meema, to oma, “those are family words and ethnic words that reflect our backgrounds and those are not the kind of words that will be used as formal words.” Such words remain in their regions and do not become so widespread.

Jan also talks about American words that can be traced back through history with origins from multiple languages. For example, the Louisiana word “lagniappe” means “small bonus, or tip.” The word comes from French, but the French word came in through Spanish, which came in through Quechua.

Visit the official website for the Dictionary of American Regional English.