John Barker, long-time host of Musica Antiqua, has passed away. John was well-known to Madison audiences as a critic writing concert reviews, as a speaker introducing musical events, and as a professor of medieval history at UW-Madison. 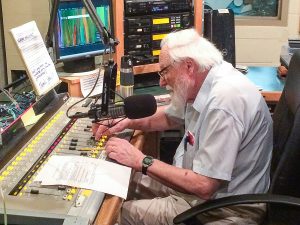 He served on the boards of the Madison Early Music Festival and the Handel Aria Competition and also had written reviews for the American Record Guide for more than 50 years.

John often said that everything he did, including hosting Musica Antiqua, was a type of teaching, and he shared his great depth of knowledge and love for music at every opportunity. Our condolences to his wife Margaret and all his family. (photos by Kathy Muirhead show John at WORT in 2014)