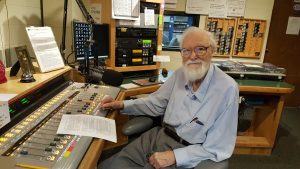 Last Sunday morning John W. Barker hosted his annual Christmas in July program on Musica Antiqua. During the show, he announced that it would be his last show, as failing health was forcing him to step down after nearly 20 years as one of the co-hosts on the program. John has been a major figure in the Madison music scene, reviewing many concerts, writing books, serving on boards, and participating in festivals – all in addition to his work at WORT. Several listeners called or commented on Facebook to wish him well. His co-hosts, Carol Moseson, Sarah Brailey, and Alan Muirhead, were at the studio to support him and expressed the hope that he will be able to come back as a guest in the future. He will be greatly missed.