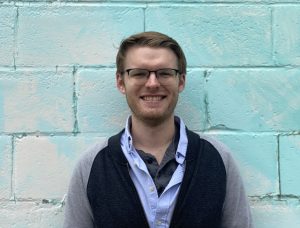 WORT is pleased to announce the hire of Jonah Chester as Assistant News Director.

Jonah hails from the small town of Tralfagar, Indiana. He received a degree in Journalism from Indiana University.

Jonah also has extensive experience in the world of podcasting. He’s worked as an audio engineer and producer for Mission Studios, where he edited, engineered, mixed and published several branded podcast series for distribution, two of which were named as Apple’s “Best of 2018” podcasts. Before that, he was the producer for the Kinsey Institute’s “Stories from the Heartland” series, which explores the experiences of LGBT couples in the midwest; as well as a podcast exploring the animal/human continuum for Indiana University’s Themester program.

Jonah has produced the WORT local news since mid-April 2020. Before that, he produced a WORT feature titled The Way We Eat.  You can find his stories online here.