On Monday April 8th, host John Quinlan interviewed Susan O’Leary who previewed her Tuesday program for the United Nations Association “Visiting Nanking to Promote Reconciliation between China and Japan around the 1937 Massacre of Chinese Civilians by the Japanese Military.” This is an effort led by her friend and teacher, the internationally-renowned artist and peace activist Kazuaki Tanahashi, who will be presenting a display of his work in Madison in August. 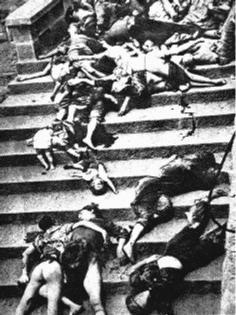 The Nanking Massacre, which occurred during the second Sino-Japanese war in 1937, is now being viewed as one of the worst atrocities of the 20th century. Upwards of 250,000 people were killed. Even In December of last year, as the 75th anniversary of the incident was marked by the world, deep feelings of resentment still lingered: feelings of anger and vengeance on the Chinese side, as well as denial and dismissal among a tiny but vocal group of Japanese nationalists, although a handful of Japanese officials have made formal apology.

In many ways, the rift between the two peoples has never mended. In 2013, this foundation for conflict also plays itself out in a potential Sino-Japanese battle over disputed islands in the South China Sea, one that has come close to reaching armed conflict in recent days. Amidst the anger and denial that constitute the massive potential kindling for conflict are peacemakers seeking to prevent the fire of war on the path to peace.

In 2007, Japanese citizen Kazuaki Tanahashi organized an international conference in Nanking (now known as Nanjing), entitled “Remembering Nanking.” Tanahashi is an internationally-known Zen artist and peace activist, and Susan O’Leary has studied Buddhist-based teachings with him and become his friend. She traveled to Nanking with “Kaz” last September. She will discuss what she learned in witnessing and being a part of his continuing Chinese-Japanese peace work.

On Monday’s show, John and Susan reflected on the philosophical underpinnings of such an effort, including its resonance with peace-related reactions to atrocities such as the Khmer Rouge massacre in Cambodia, ethnic cleansing in Eastern Europe, and the My Lai Massacre.

More on Susan’s Tuesday presentation for the United Nations Association of Dane County can be found here:

Due to a technical error audio for this program is unavailable