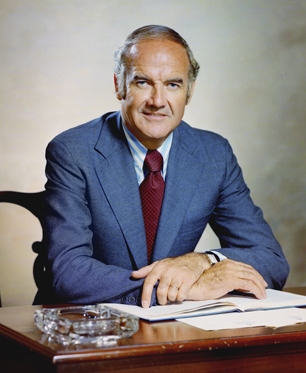 According to the New York Times piece written shortly after McGovern’s death, “George McGovern Dies at 90, a Liberal Trounced but Never Silenced:”

“To the liberal Democratic faithful, Mr. McGovern remained a standard-bearer well into his old age, writing and lecturing even as his name was routinely invoked by conservatives as synonymous with what they considered the failures of liberal politics.

He never retreated from those ideals, however, insisting on a strong, “progressive” federal government to protect the vulnerable and expand economic opportunity, while asserting that history would prove him correct in his opposing not only what he called ‘the tragically mistaken American war in Vietnam’ but also the American invasions of Iraq and Afghanistan…

Mr. McGovern remained a voice in public affairs, notably in 2008, when, in an op-ed article in The Washington Post, he called for the impeachment of President George W. Bush and Vice President Dick Cheney for their prosecution of the war in Iraq.

He published books regularly, on history, the environment and other subjects. In “Out of Iraq” (2006), written with William R. Polk, he argued for a phased withdrawal from Iraq, to end in 2007. In his final book, “What It Means to Be a Democrat,” released last November, he despairs of an “insidious” political atmosphere in Washington while trying to rally Democrats against “extremism” in the Republican ranks.”