“One small step for man, one giant step for mankind.”  Those words .. missing article and all… were broadcast around the world on July 20, 1969, as Neil Armstrong became the first human being to set foot on the surface of the moon.  Fifty years later, Armstrong’s footprint still remains, thanks to the airless, waterless conditions on the moon, as do the U.S. flag and the plaque on the lunar lander ladder, which reads “Here men from the planet Earth first set foot upon the Moon, July 1969 A.D. We came in peace for all mankind.”  To commemorate the fiftieth anniversary of the lunar landing, the University of Wisconsin Milwaukee Manfred Olson Planetarium will host “Lunar Day” on Saturday, July 20.  Jean Creighton, UW Milwaukee planetarium director, joined Monday Buzz host Brian Standing. 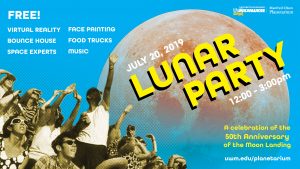