The Wisconsin spring election is approaching in just a few weeks on Tuesday, April 6th, and Madison residents will have the opportunity to weigh in on the job of alder.

There are four referendum questions on the spring ballot for the City of Madison, which ask voters how they think the Madison Common Council should be structured.

The questions on the ballot are based on recommendations from the city’s Task Force on the Structure of City Government, or TFOGS. That group has spent more than two years studying the structure of the City’s government, finding that the current structure is “an impediment to full participation and representation.” A final report from the task force, released in fall 2019, concluded that the current structure is fundamentally unfair to Madison’s low-income residents and residents of color.

The task force also made a number of recommendations, and four been adapted as ballot questions on the spring ballot. These questions are advisory, not binding. They will serve, essentially, as a public opinion survey for the Common Council.

The task force made this recommendation to provide “full time” representation to Madison residents. They also suggest that it would make the position accessible to more people who couldn’t otherwise serve, due to financial constraints or the necessary time commitment. However, detractors say professionalizing alders could lead to more expensive campaigns.

Besides expensive campaigns, David Ahrens is concerned that transitioning to full-time alders could effectively make the position accessible to only an elite few. The former district 17 alder served the council from 2013 to 2019. He sat on the Task Force, but was not in office when the final report was released.

Ahrens says having council members who have other jobs not negative, rather it is beneficial to the council’s diversity and reach. “What we have then is sort of this political quandary of people who are full time, at the council, at the city council building, not a part of the community.  If you look at what do the council members do now, one is a vice presidnet of  a bank, another works at a non-profit, a school teacher, you know, on and on and on, two or three retirees, an accountant–these are people who are in the world,”  he explains. “People will just become kinda sucked into this cyclonic force of the bubble of any kind of political life, and that’s the only thing you see.”

Ahrens also points to additional costs such as benefits, office space, and more staff as a reason he doesn’t support the change.

The second referendum question asks if the number of alders–which is currently twenty –should be reduced, increased, or stay the same. While the question gives the option of increasing alders, the task force considered reducing alders to make the full-time proposal financially feasible.

Assistant City Attorney John Strange says that the districts would need to get larger to adapt to fewer alders.

“Larger districts could change the level of influence that a small number of residents or associations could have on a single alder. And therefore the alder could potentially  be in a better position to consider the best interests of the entire city, not just a small area of their individual district,” says Strange.

This would require the city to undergo redistricting. Strange adds that under state law, the city is already required to redistrict every ten years due to the census. 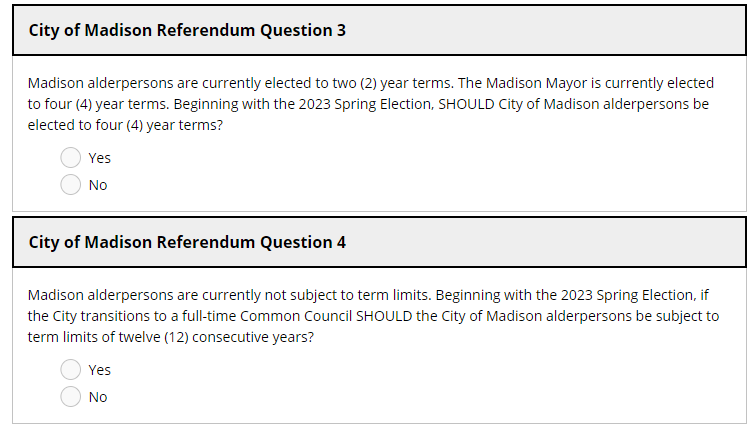 The final two referenda refer to term length and term limits. Referendum question 3 asks if term lengths should be doubled from 2 years to 4 years. The final question asks if terms should be limited to 12 consecutive years if the city transitions to full-time alder positions. That might combat that concern of professionalizing the position.

Again, these are non-binding referenda. Strange says the results will be used by the Common Council to decide next steps.

Full-time positions and term limits could be enacted by city ordinance, while considerations on the number of alders and their term lengths would need to be placed on the ballot again in spring 2022 in order to be adapted. That time, the questions will be binding.

If any actions are taken, the changes would go into effect in Spring 2023.

Image by Yinan Chen from Pixabay