The Hermina Street alley behind the Madison East Shopping Center has always had a scruffy, unwelcoming, maybe even downright unsavory appearance.  Plain brick walls, dumpsters, locked back doors to the shops in the strip mall, it’s not a very welcoming place, Most residents and shoppers never knew it existed, and those who did, often hurried by.  When the city put together its Darbo-Worthington-Starkweather Neighborhood Plan, residents told city planners that they wanted to see artwork, movies and more in the space behind the Hawthorne Branch Library.  The city commissioned several mural artists, who were putting the finishing touches on what the City has dubbed Mural Alley, working to get everything ready for the grand opening August 13, 2018 at 6 o’clock.  Henrique Nardi, originally from Sao Paulo, Brazil, is a visiting lecturer and artist at the University of Wisconsin Madison, and he’s overseeing the Mural Alley project. He joined the Monday Eight O’Clock Buzz on August 13, 2018. 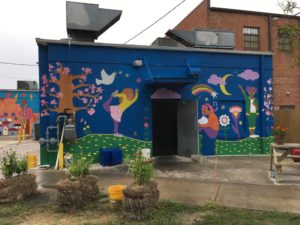 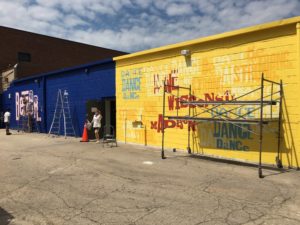