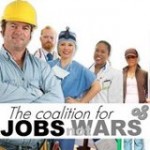 On Wednesday December 5, host Jan Miyasaki speaks with Mary Hladke, the National Coordinator of Military Families Speak Out. Military Families Speak Out  is a coalition of 56 families that have joined forces to fight austerity measures and are demanding cuts to Pentagon spending. Mary speaks about their campaign, Jobs Not Wars, “On election day, Americans rejected austerity. They want to reduce the deficit at the expense of working people, middle class, poor, and elderly. We believe if we end the war, and make substantial cuts to Pentagon spending, we can reduce the deficit, and create good paying jobs, and have the money to care for our people, community, and environment.”

Mary explains the two unique points of their campaign: “We are a broad coalition of organizations, which is unusual. Another thing is we are asking for an end to the war now, and big cuts to pentagon spending. Pentagon budget has all the money, why is nobody talking about that?” Mary speaks about the fraud, waste, and abuse of money with the large Pentagon budget. “37 cents/1 dollar of taxes paid this year goes to funding current and past wars.” Since this is a coalition of military families, Mary distinguishes between the troops, whom she supports, and the war itself, “You can support the troops and not support the war.”

There is a Jobs Not Wars petition that can be signed on at jobs-not-wars.org