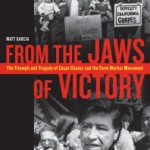 On Tuesday October 30, our host Aaron Perry spoke with Professor of Transborder Studies and History at Arizona State University Matt Garcia, author of From the Jaws of History: The Triumph and Tragedy of Cesar Chavez and the Farm Worker Movement. He speaks about Cesar Chavez and the United Farm Workers. With his family’s background in farming, he grew up very interested in farming and the history of farm workers specifically. He explains that the conditions of farm workers today could be described as “close to slavery”. Matt affirmed that Cesar Chavez’s efforts were indeed the most successful farm worker movement in the history of the United States, ending the Bracero program, achieving the first farm worker contracts, and bringing about a law that recognized collective bargaining rights for farm workers. However, the book continues into an account of the decline of the farm worker efforts, exploring both the rise and fall of Chavez.

Matt provides the disclaimer that this book is not meant to erode the efforts of collective bargaining and union efforts. Instead, he hopes that his book addresses the issue of learning from mistakes in history. He questions, “how do we learn from the mistakes of a single individual in an autocratic leadership so we can build stronger unions and build stronger leadership when arguing for collective bargaining rights.”

Matt explains, “…Chavez tried to get access to the farms where he could campaign for elections…and the voters rejected it. Instead of learning from that, he began to question the law, and question the people who had been loyal to him, and started looking for conspirators. That’s why he went towards an intentional community and started to purge people from the union for what he had alleged is their disunity and disloyalty.” Matt explains the response to his book so far, “Cesar Chavez is an icon to Mexican Americans…the reality is that this story has not been told because people have not dared to look at the historical records. Yes there have been some people upset with me challenging Chavez’s legend and his legacy, but there are others who have known this history for a long time and been afraid to talk about it and share their perspectives. This book is opening up an important conversation that will allow us to move forward towards that elusive goal of farm worker justice.”

His message to readers is this, “This is a good study in leadership. What is very useful from this book is the idea that you need democracy, and you need to listen to the people around you. Chavez stopped doing that in the mid ’70s. When you are building an institution, it’s important to incorporate those lessons and that democracy so that you can hear the voices around you that are giving you those perspectives…so they drifted into autocratic leadership…and that led to the downfall of the union.”
Read more about Matt Garcia here (mattgarcia.org)