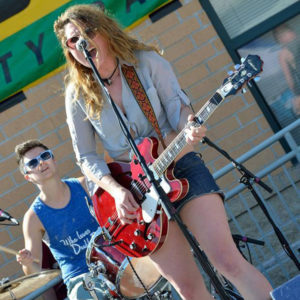 Fresh off their show-stopping performance at The Willy Street Fair, Meghan Rose & The Bones performed on ‘Songs of Safety and Manners’ hosted by Ted Offensive last Friday, Sept. 25. SOSAM airs from 8-11 pm on WORT 89.9 FM and the live music runs from 10-11 pm. Like all of WORT’s programs, the show can be streamed via wortfm.org and is also available to hear on demand for the following two weeks.

‘The Bones’ is a project starring Madison musician and multi-instrumentalist Meghan Rose. She is also in feminist trash punk band Damsel Trash, “thoughtfully composed rock” outfit I Saw the Creature and versatile folk-pop group Little Red Wolf, among others. 2015 has been a great year for Meghan, as she took home awards from the Madison Area Music Association for Female Vocalist of the Year and for Bassist of the Year, and with her band Damsel Trash won awards for Hard Rock/Punk Song and Album of the Year, and with I Saw The Creature nabbed Blues Song of the Year as well. In addition, she won the title of 2014-15 Local Musician in The Isthmus’ annual MadFaves readers’ poll.

Having made a name for herself on the Madison music scene, Meghan has graciously agreed to showcase her vocal prowess and lively performance skills for the listeners of WORT. Her main songwriting influences are Indie queens Jenny Lewis and Neko Case. She is so dedicated to her craft that she made the trek up to Canada to work with Darryl Neudorf (who has produced for Neko Case) on her solo album.

What’s wonderful about an artist who has the talent and the guts to wear so many proverbial hats is that you never know what she is going to do next!

Listen to the archive from Friday night to hear for yourself.