Last week we learned a little about the science of memory. Tonight, the Perpetual Notion Machine continues the topic of memory. Our guest, psychologist and neuroscientist at UW-Madison Brad Postle, is back to tell us more. In his conversation with PNM’s Dennis Shaffer, Brad mentions that each memory has its own set of neurons, connections, and wiring patterns. But, determining whether a memory is encoded and stored depends a lot on the strength of these connections and patterns from different sensory inputs. Also, we know that not every memory formed gets stored, and not every stored memory gets retrieved. But the brain has a limitless possible number of neurons, connections, and patterns that EVERY memory formed COULD BE stored and retrieved. Brad also discusses several research studies, including one with a lot of potential concerning PTSD from traumatic memories.

A few websites provide some good information: Human-memory, Queensland Brain Institute, and this one for kids from Discovery Express.

When you enter this post, you will notice two audio files. The first one is a recorded version of what got aired on the radio. But I had such a lengthy conversation with Brad that not all made it to the broadcast version. So, for your enjoyment (or not), a virtually unedited version of the extended interview for this show appears as the second audio file.

And finally, I wasn’t planning on including this in the show, but I brought up to Brad a photo I have when I was about 2 and half years old. I’m sitting on a lawn chair holding on to my baby brother. I have no memory of this event, even though the photo is a snapshot of the moment. I guess my child’s underdeveloped brain couldn’t retain this memory. 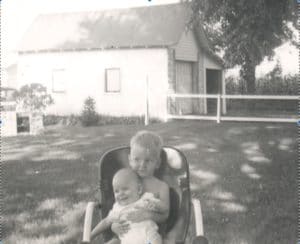