On Musica Antiqua, Sunday, November 6, Mike Allsen describes the evolution of medieval English sacred music from monophonic chant to polyphonic forms such as conductus, rondellus, carols and motets with examples performed by Anonymous 4, the Orlando Consort, Liber Unusualis, the Hilliard Ensemble, the Binchois Consort, the Mediaeval Baebes and others. In addition to Mike’s segments, you’ll hear other early music, including an instrumental set inspired by the recent Madison Bach Musicians concert and pieces by Heinrich Schütz, the noted German composer who died 350 years ago on November 6. 1672. Musica Antiqua will end with the great Te Deum that Handel wrote for Queen Caroline. The image is a medieval map of the world (“mappa mundi”) showing Jerusalem in the center with north to the left. The British Isles are in the lower left – rather isolated from mainland Europe, much as English music was also separated from the mainstream at the time. 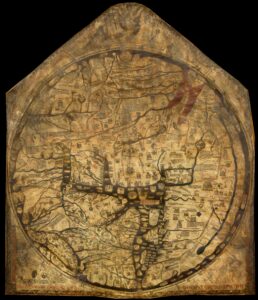