The two Republican frontrunners for governor spoke to the voters last Thursday at a “Pints and Politics” event organized by the Dane County GOP.

Tim Michels and Rebecca Kleefisch spoke at the Doubledays event center and sports bar in Cottage Grove, where they attacked Governor Tony Evers ,accused the 2020 presidential election of being rife with fraud, hit on all of the current conservative talking points – and denied WORT’s requests for an interview. 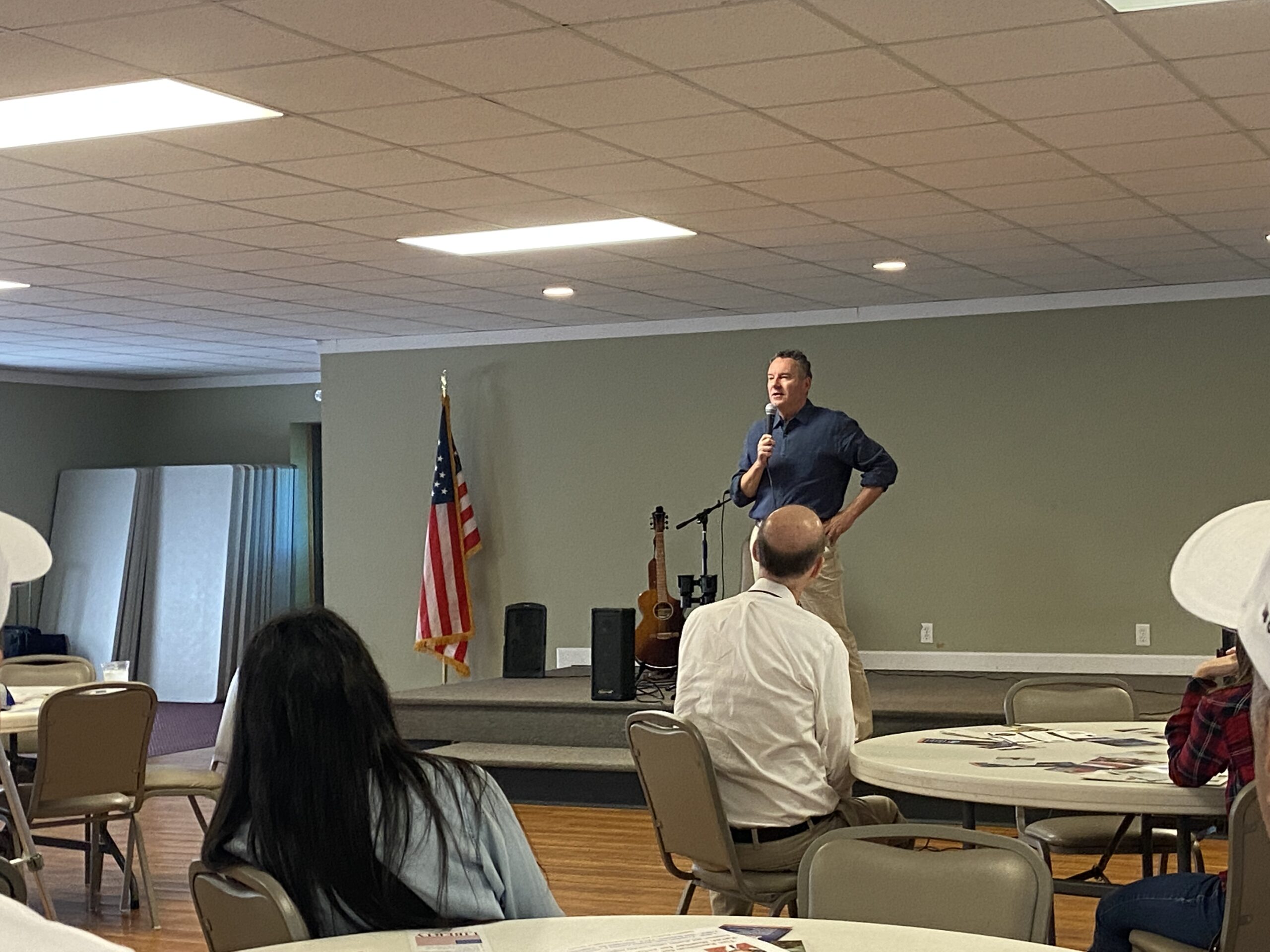 Michels took the stage first, before a crowd of around 100 people. Michels, who is running as a political outsider, previously ran for US Senate here in Wisconsin in 2004, where he lost to incumbent Russ Feingold.

Michels began his speech by explaining why he decided to run.

“We’ve said we can’t take it any more! We’re so sick of these people, this woke liberal left that is taking us towards socialism. It’s cloaked, it’s cloaked behind CRT and BLM and Defund the Police, but you know and I know what they really want, and that’s to tear down America as we know it. America, where the great American dream still lives. We are going to do our part. My wife says ‘Tim, all it takes for evil to prevail is for good men to do nothing.’ My wife thinks I’m a good man.”

Michels then laid out his three key priorities he would address if elected.

“Everywhere I go people ask me ‘Tim, was the election rigged, was the election fixed? What are you going to do about it?’ I say you’re darn right I’m going to make it my number one priority, this is not going to happen again under my administration. I tell you what, this is the United States of America, it’s not some third-world country, it’s not some banana republic, (it’s the) United States of America. We should not be having questions about the election. I’m going to work with the legislature, I’m going to get those bills, those bills that Tony Evers vetoed, and we are going to pass them. There will be no more Zuckerbucks! No more out of state billionaires coming in here and taking control of our election.”

Only 24 people in Wisconsin were charged with election fraud after the 2020 presidential election. Multiple recounts and court cases have affirmed that Joe Biden won the state of Wisconsin by around 21,000 votes.

After saying he would end indefinitely confined status for voters, which allows voters with disabilities to receive absentee ballots, Michels then shifted to his second priority: addressing crime.

“How did we get to this place in America, where less police is better? Where cops are bad? What the heck happened there? I’ll tell you what happened, bad leadership (happened). With Joe Biden out in Washington DC with all his liberal staff that are supporting the Defund the Police movement and trying to take down law enforcement. Tony Evers (is doing) the same thing, coddling these criminals. These DAs let these criminals out on a catch and release basis.”

According to the state Department of Justice, crime in Wisconsin slightly fell from 2017 to 2021. Additionally, the city of Madison’s current police department budget is around $84 million dollars.

After his speech came a short Q-and-A session. One woman asked for Michels to come clean and clarify if he would decertify the 2020 presidential election.

“Here is what I know: there was a lot of fraud in the election, there was a lot of stuff that happened that we have to make sure will never happen again. Here is what nobody knows: here is what nobody in this room knows, what justice Gableman doesn’t know, what anybody in the legislature knows: nobody knows how many fraudulent votes were cast. When I’m sworn in in January, I will take all the information that I have and make the proper decision at that time,” Michels says.

After a short self-described  rant on the different controversies that have surrounded his campaign, where he reaffirmed that he does live in Wisconsin and has not been endorsed by the NRA, Michels left the stage.

Next up was Rebecca Kleefisch. Kleefisch served as Lieutenant Governor during the Walker administration. 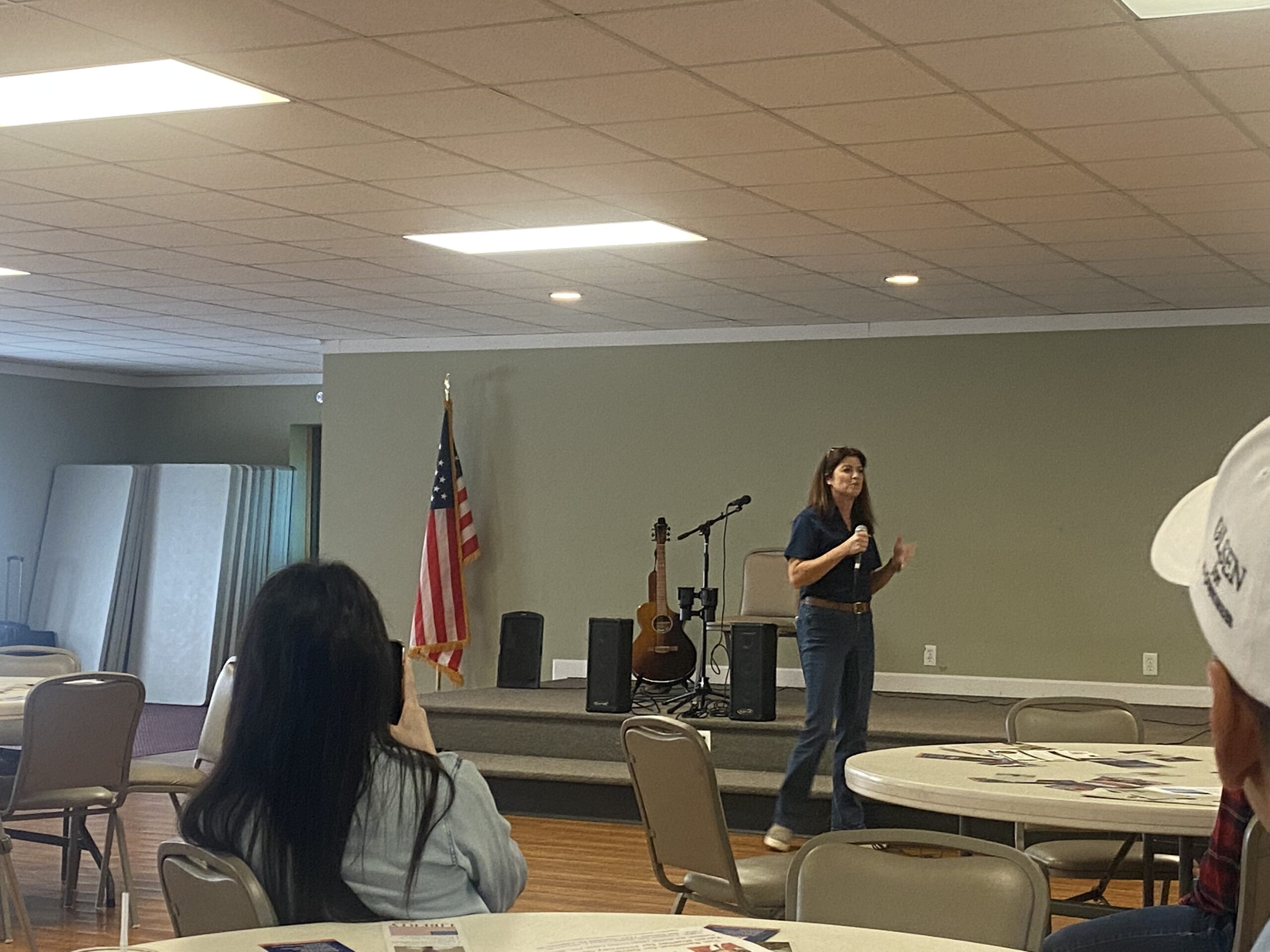 Kleefisch began by telling the audience why she is the best candidate to take on Governor Evers in November.

“You guys have probably already seen that I am statistically the only one who can beat him. I’ve had a 12 year long record with the people of this state. I love this state, I live in this state, my children go to school in this state, and I am the best person to stand on the debate stage with Tony Evers and take it to him, because my two children were among those countless thousands locked out of their classrooms by Governor Evers.”

She then spoke about criminal justice reform here in Wisconsin. Kleefisch told a story of going on a ride along with the Milwaukee Police Department, and talking with residents about what they want to see in Wisconsin.

“He said we do need 1000 more cops on the streets, like I have pledged to do. He said we do need bail and sentencing reform to tie the hands of bad District Attorneys and bad judges who just let the bad guys go so the cops have to re-arrest the same people every five days.”

After describing a grisly scene where she stumbled upon the aftermath of a shooting,  Kleefisch returned to her role as a parent, and how that will influence her policy.

After her speech, Kleefisch also held a Q-and-A with the audience, who was much less receptive to her compared to Michels. One of the first questions came from a former-state employee who chastised Act 10, and asked whether Kleefisch would expand Act 10.

“So I was a state worker too, and I would say that as a state employee, but also as a resident of the state, that saving $15 billion is not hurtful, it’s helpful. There is no plan to do additional iterations of Act 10 because as we all saw, our country dipped into a recession. The time for raising taxes is not now when we are dipping into recession,” Kleefisch says.

After another man spent several minutes yelling at Kleefisch for not returning his call while she was in office, Kleefisch took a few more questions before leaving the stage.

With the partisan primary only nine days away, national leadership is split on the candidates. Donald Trump is endorsing Michels, while Pence is endorsing Kleefisch.

According to the latest Marquette Law School Poll, both candidates are neck-and-neck, with 27% of voters supporting Michels and 26% supporting Kleefisch. The same poll shows Evers edging out either candidate in the November election.

Editor’s note: This article has been changed to reflect the correct name of the venue, Doubleday’s.