On Thursday April 25th, host Allen Ruff spoke with author Susan Abulhawa about her book, “Mornings in Jenin.” Abulhawa was born to refugees of the 1967 war when Israel captured what remained of Palestine, including Jerusalem. She currently lives in Pennsylvania with her daughter. She is the founder and President of Playgrounds for Palestine, a children’s organization dedicated to upholding The Right to Play for Palestinian children. Her essays and political commentaries have appeared in print and international news media and she is a contributing author to two anthologies, Shattered Illusions (Amal Press, 2002) and Searching Jenin (Cune Press, 2003). Mornings in Jenin is her first novel. 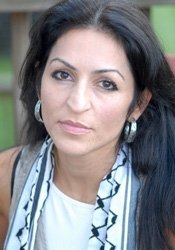 “Palestine 1941. In the small village of Ein Had a father leads a procession of his family and workers through the olive groves. As they move through the trees the green fruits drop onto the orchard floor; the ancient cycle of the seasons providing another bountiful harvest.

Palestine 1948. The Abulheja family are forcibly removed from their ancestral home in Ein Hod and sent to live in a refugee camp in Jenin. Through Amal, the bright granddaughter of the patriarch, we witness the stories of her brothers: one, as stolen boy who becomes an Israeli soldier; the other who is sacrificing everything for the Palestinian cause will become his enemy.

Amal’s own dramatic story threads it’s way through six decades of Palistine-Israeli tension, eventually taking her into exile in Pennsylvania in America. Amal’s is a story of love and loss, of childhood, marriage, parenthood, and finally the need to share her history with her daughter, to preserve the greatest love she has. Richly told and full of humanity, Mornings in Jenin forces us to take a fresh look of one of the defining political conflicts of our time. It is an extraordinary debut.” -Bloomsbury USA