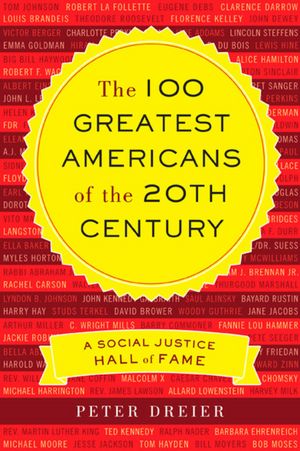 “As the American electorate veers from frustration and anger to apathy and cynicism, with both sides of the political aisle to blame, a heartening new work by historian and professor of politics Peter Dreier reminds readers of the true source of progress and social change in the United States: movements for social justice.

Dreier’s new book, The 100 Greatest Americans of the 20th Century: A Social Justice Hall of Fame (Nation Books; July 2, 2012), explores the remarkable individuals who won victories for social justice over the course of the 20th century, and looks at major milestones in worker’s rights legislation.

‘These accomplishments did not occur because progress is inevitable or because a set of benevolent ‘haves’ took pity on the have-nots of society,’ says Dreier. ‘The credit for these achievements goes to the activists who fought to take their ideas from the margins to the mainstream. We all stand on the shoulders of earlier generations of reformers, radicals, and idealists who challenged the status quo.'”

To read more about “The 100 Greatest Americans of the  20th Century:”