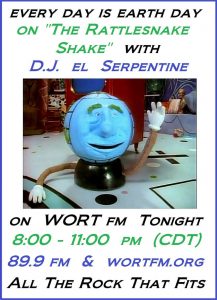 D.J. el Serpentine & “The Rattlesnake Shake” took over the Friday On My Mind prime time rock slot from 8-11 pm April 23 with a satisfying mix of new releases and vintage deep tracks, and a lot of local music too. All kinds of ROCK!

(Photo of Joe Lovano at Jazz at Lincoln Center 2014 by Stephen Braunginn)
On Strictly Jazz Sounds with host Steve Braunginn 2-5 PM Thursday April 22, new jazz and birthday celebrations of two of the best bassists in jazz history were on tap. Saxophonist Joe Lovano is featured on two new jazz offerings during the first hour of SJS. Following that is a two-hour birthday party celebrating jazz bass Downbeat Hall of Famers Charles Mingus and Paul Chambers. SJS will spend most of the two hours in the 1950s, with Mingus’s chamber groups playing the hip jazz of the 50s and Chambers doing the blues with Miles Davis and Roy Haynes as well as playing some classics with Red Garland and the Wynton Kelly Trio, featuring Wes Montgomery. 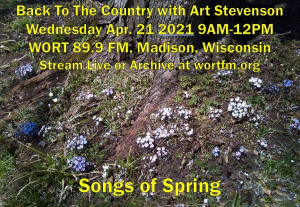 One of our alternating Wednesday morning hosts Art Stevenson says “Howdy Folks! Join me on Back To The Country from 9AM to noon on Wednesday, April 21 for “Songs of Spring” along with requests, new acquisitions, and examples of renowned Bluegrass banjo player J.D. Crowe’s recordings over the decades. On this Earth Day Eve, songs of nature, flowers, and Spring are in abundance on Back To The Country! 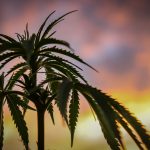 Psychoacoustics did a smokin’ show from 8-11pm on Thursday 4-22 (because, you know…it’s four-twenty, too.) Rev. Velveteen edited archive shows from 4-20-2010 and 4-22-2017, plus new music on the theme and specially selected Slack materials for this “High Holy Holiday” service.

On Green Morning Radio last Tuesday, Brian gave us the ultimate 4/20 playlist! Or as he puts it, “Ok, maybe not that good, but a collection of cannabis songs from the 60’s to the modern day, in chronic-ological order starting with Bob (Dylan)‘s Rainy Day Women #12 & 35. Tune in as I burn through over 30 songs referring to the cannabis herb in one way or another. Artists include The Jim Kweskin Jug Band, John Hartford, Chris Stapelton, Kasey Musgraves, and even Willie Nelson! So whether you call it Crazy Weed, Giggle Smoke, Devil’s Lettuce, Wacky Tobacky, Chronic Crippler, Jazz Cabbage, Mary Jane, Reefer McEntyre, The Sticky Icky, The Dank, Ganja, Funny Cigarettes, Joy Smoke, Kaya, Viper Tea or illegal, this show should cure what ails ya! (This show is approved for recreational use!)

Women are vastly underrepresented in 420 playlists. DJ Kayla Kush says “I am here to change that. Check out 2 DUB from Saturday night April 17 at 10 pm and enjoy two hours of #ganja tunes by women and featuring women. Happy Holidaze!

And that takes us all the way back to Vinylthon last Saturday April 17, when four of WORT’s hosts recorded new shows using all vinyl. Two more ran curated archives so we could get as much wax in our ears as possible, earning WORT a “Golden Slipmat” award. Review those shows in our archives here.